Right Before SOTU, Trump Puts an End to Obama’s Dream of Closing GITMO 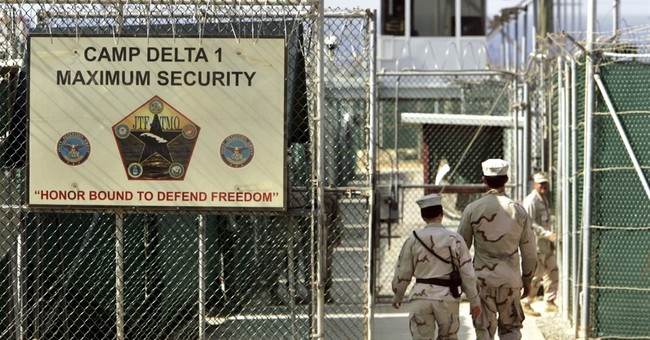 Just minutes before entering the House chamber for his first State of the Union address to the nation, President Trump signed an executive order reversing President Obama's decision to close Guantanamo Bay Prison.

"Terrorists who do things like place bombs in civilian hospitals are evil.  When possible, we annihilate them.  When necessary, we must be able to detain and question them.  But we must be clear:  Terrorists are not merely criminals.  They are unlawful enemy combatants.  And when captured overseas, they should be treated like the terrorists they are," Trump said. "In the past, we have foolishly released hundreds of dangerous terrorists, only to meet them again on the battlefield -- including the ISIS leader, al-Baghdadi."

"I just signed an order directing Secretary Mattis to reexamine our military detention policy and to keep open the detention facilities at Guantánamo Bay," he continued.

Secretary Mattis was in attendance at the speech and sat in the front row with the rest of the President's cabinet.

President Obama signed an executive order on January 22, 2009 to close the prison, but didn't fully accomplish the goal before leaving office in 2016.

Trump also discussed the ongoing war in Afghanistan and the change in rules of engagement from the previous administration.

"Our warriors in Afghanistan also have new rules of engagement," Trump said. "Along with their heroic Afghan partners, our military is no longer undermined by artificial timelines, and we no longer tell our enemies our plans."