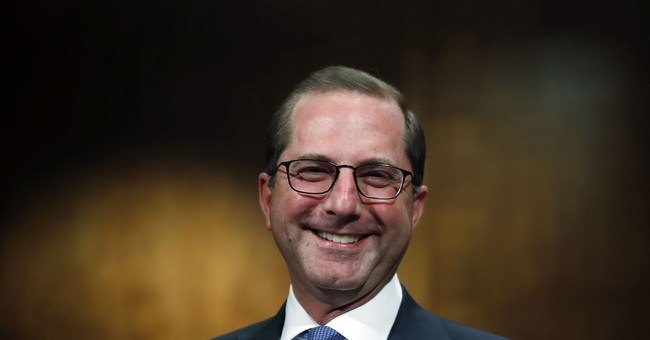 President Donald Trump and Vice President Mike Pence swore in new Health and Human Services Secretary Alex Azar Monday morning at the White House. His nomination was approved by the Senate last week in a 55-43 vote.

"[Alex] brings an invaluable private sector experience to complement his years of public service," President Trump said. "As our new secretary, Alex will continue to implement the administrative and regulatory changes needed to ensure that our citizens get the affordable high-quality care that they deserve."

Trump said Azar will focus on bringing drug prices down and fighting the opioid crisis.

Azar is already familiar with HHS and served as deputy secretary and general counsel for the government agency during the Bush administration. He has spent a significant amount of time during his career in the private sector. Since 2012 until his November 2017 nomination for the position, Azar served as the president of drug company Eli Lilly.

"What an honor it is today to become the 21st Secretary of Health and Human Services here in the United States. Only in America, the grandchild and great grandchild of immigrants from Lebanon, Ukraine, from England, Switzerland gets to have that opportunity," Azar said. "I know these people, I know this team and the deep commitment they have to HHS to enhance and protect the well being of all Americans."

"We have to tackle the scourge of the opioid crisis and we will bring down prescription drug prices," he continued. "It's time to get to work."

In September 2017, former HHS Secretary Tom Price submitted his resignation after being embroiled in controversy after charging taxpayers for a number of flights on private jets.