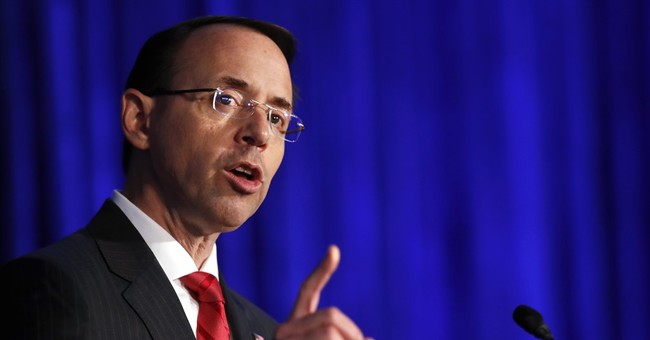 House Intelligence Committee Chairman Devin Nunes is blasting the Department of Justice and FBI after officials ignored congressional subpoenas and blew threw a deadline to turn over documents related to the infamous Fusion GPS dossier.

In a letter to Deputy Attorney General Rod Rosenstein, Nunes points out that not only did DOJ mislead his Committee about the existense of documents, they also unlawfully failed to comply with congressional requests.

"Several weeks ago, DOJ informed the Committee that the basic investigatory documents demanded by the subpoenas, FBI Form FD-302 interview summaries, did not exist. However, shortly before my meeting with you in early December, DOJ subsequently located and produced numerous FD-302s pertaining to the Steele dossier, thereby rendering the initial response disingenuous at best," Nunes wrote.

"As it turns out, not only did documents exist that were directly responsive to the Committee's subpoenas, but they involved senior DOJ and FBI officials who were swiftly reassigned when their roles in matters under the Committee's investigation were brought to light. Given the content and impact of these supposedly newly-discovered FD-302s, the Committee is no longer able to accept your purported basis for DOJ's blanket refusal to provide responsive FBI Form FD-1023s--documenting meetings between FBI officials and FBI confidential human sources-or anything less than full and complete compliance with its subpoenas," he continued.

The subpoenas were sent out in August and have been ignored for months.

Nunes is seeking documentation about the dossier, but is also demanding interview dates for the following officials:

DOJ now has until January 3 to comply as Nunes readies contempt charges.