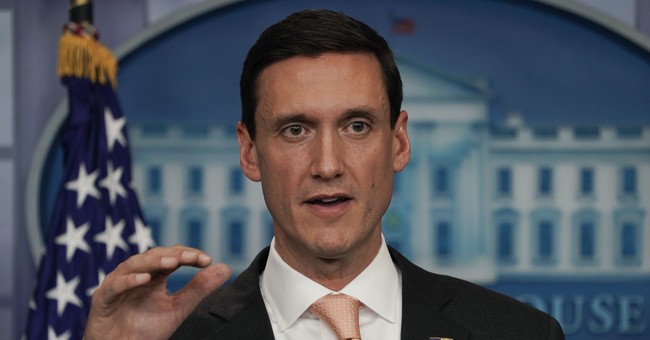 Speaking to reporters in the White House briefing room Thursday afternoon, Homeland Security Advisor Tom Bossert made clear illegal immigrants are not eligible to receive long-term federal disaster relief funds reserved for American citizens after being pressed repeatedly by reporters on the issue. At the same time, Bossert made it clear illegal immigrants should not fear or hesitate in seeking help with shelter, food and water in the aftermath of the Hurricane Harvey.

From the White House press office bolding is mine):

Q  I have one more question for you, if I may.  There are 575,000 undocumented immigrants in Houston, one of the largest populations in this country.  Does this White House believe they should be eligible for long-term federal recovery assistance?

MR. BOSSERT:  I think illegal immigrants and that issue has come up a number of times.  So if you've committed a crime, that's the priority for the Department of Homeland Security.  I think you've heard John Kelly say that, and pretty clearly the head of Immigration and Customs Enforcement, and the head of CBP.

What I would say, though, is in terms of immediate life saving:  No individual human being should worry about their immigration status, unless they've committed a crime on top of coming here illegally, when it comes to getting food, water and shelter.  So the authorities won't be conducting any routine swipes or searches inside those shelters.  Those are shelters for food, water, and providing kind of insulation against exposure.

Now, subsequently, our priority will be illegal immigrants who have committed crimes.  They're going to be rounded up as they always are, and taken out of this country if we find them.  I think that's pretty clear.

Q If you are an undocumented immigrant and you did have a home, and that home was destroyed in a flood and you are in a shelter, what happens?

MR. BOSSERT:  There's a lot of ifs there, and I'll figure that out as I deal with them.  But from my perspective, the priorities couldn't be any clearer.  So I don't think that I even know how to begin to answer that question.  But I will say that there's no real wavering here, and it's pretty clear about our position on immigration.  So hopefully that answers your question.  I don't think there's going to be a lot of benefits going out to illegal immigrants in terms of the American taxpayer.

In other words: Illegal immigrants who haven't committed a crime outside of entering the United States illegally are fine. Food, water and shelter are being offered to everyone, regardless of immigration status. Sweeps are not being done inside shelters. Finally, illegal immigrants are not eligible for long term federal government disaster assistance like the National Flood Insurance Program.