Trump Goes After Vulnerable Democrat Claire McCaskill in Her Home State: Vote Her Out! 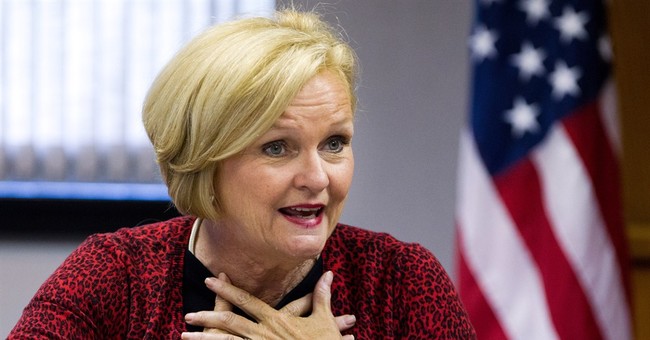 During his first major pushfor tax reform on the road Wednesday afternoon, President Trump called out vulnerable Democrat Senator Claire McCaskill while giving remarks in her home state of Missouri.

"We must lower our taxes and your senator, Claire McCaskill," Trump said. "She must do this for you and if she doesn't do this for you, you have to vote her out of office."

"She's got to make that commitment," he continued. "What could possibly be more bipartisan than helping people keep more of what they earn?"

McCaskill is up for reelection in 2018, but as local media notes, the race has already begun and has Democrats on edge. Missouri voted for President Trump, who McCaskill has vocally opposed, in the 2016 presidential election. McCaskill won re-election against Republican Todd Akin in 2012 after he made comments about "legitimate rape" and was dumped by the RNC.

“This is a very vulnerable seat to a strong Republican,” Robertson said. “Either Hawley or Ann Wagner would be seen as pretty strong candidates. … So this is going to get a whole lot of coverage in the media and a whole lot of money, certainly an unprecedented amount of money for a Missouri Senate race.”