Kushner Speaks: Those Suggesting Trump Won Because of Russia are Ridiculing American Voters 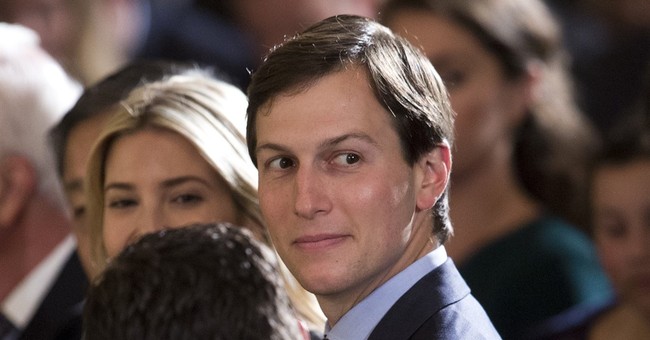 Speaking from the White House Monday, Senior Advisor Jared Kushner and husband to Ivanka Trump, strongly denied ever colluding with Russia to win the 2016 presidential election. The statement came shortly after Kushner testified behind closed doors in front of the Senate Intelligence Committee on Capitol Hill.

"I did not collude with Russia, nor do I know of anyone else in the campaign who did so," Kushner said. "I had no improper contacts. I have not relied on Russian funds for my businesses. I have been fully transparent in providing all requested information."

When my father-in-law decided to run for president, I served his campaign the best I could because I believe in him and his ability to improve the lives of Americans. And now, serving the President and the people of the United States has been the honor and privilege of a lifetime," he continued. "I am so grateful for the opportunity to work on important matters, such as Middle East peace and reinvigorating America's innovative spirit. Every day I come to work with enthusiasm and excitement for what can be."

Jared Kushner: "Serving the president and the people of the United States has been the honor and a privilege of a lifetime." pic.twitter.com/UuaWrQ9foY

Further, Kushner said the accusation of collusion is an insult to the American people who voted for Trump in November.

"Donald Trump had a better message and ran a smarter campaign and that is why he won. Suggesting otherwise ridicules those who voted for him," Kushner said.

Jared Kushner on Russia: "I had no improper contacts. I have not relied on Russian funds... and I have been fully transparent." pic.twitter.com/YQo1ahce45

Kushner is credited for Trump's win and being the brains behind voter targeting efforts in reliably blue states like Wisconsin and Michigan, which flipped red in 2016. He detailed the tech strategy for a cover story in Forbes late last year:

“We found that Facebook and digital targeting were the most effective ways to reach the audiences. After the primary, we started ramping up because we knew that doing a national campaign is different than doing a primary campaign. That was when we formalized the system because we had to ramp up for digital fundraising. We brought in Cambridge Analytica. I called some of my friends from Silicon Valley who were some of the best digital marketers in the world. And I asked them how to scale this stuff. Doing it state by state is not that hard. But scaling is a very, very hard thing. They gave me a lot of their subcontractors and I built in Austin a data hub that would complement the RNC's data hub. We had about 100 people in that office, which nobody knew about, until towards the end. We used that as the nerve center that drove a lot of the deployment of our ground game resources.

"We played Moneyball, where we were asking, ‘Which states are will be the most cost effective—ROI per electoral vote.’ We used a lot things to get much more bang for the buck… We got rid of a lot of the political people. That's not who we hired. Our best people were mostly people who volunteered pro bono, people from the business world, people from nontraditional fields. We could squeeze the margin so that nobody was getting rich on it. And we only had people who were doing it for the right reasons, not because they wanted to go onto the next campaign, but because they felt passionately about getting Donald Trump elected."