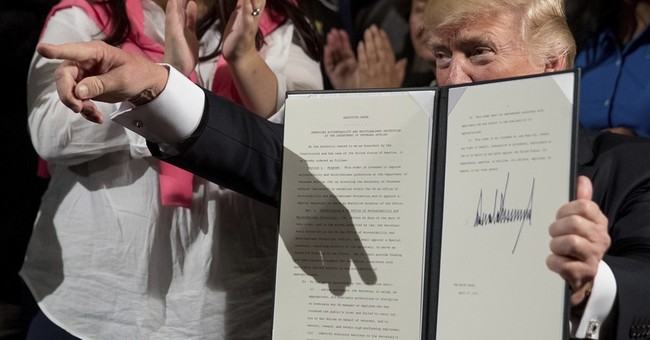 After years of shameful reports about veteran care, investigations and scandal, the House is set to vote on legislation to reform the embattled Veterans Affairs system.

"Any of you who have reported on this scandal over the last few years know how entrenched the problems at the VA really are. This legislation is one of, if not the biggest step we have taken to turn this page," Ryan said. "We look forward to sending this major bipartisan legislation to the president’s desk. We’ve been talking about this for about three years. And we uncovered all the scandals at the VA. Now we’re making law. Now we’re bringing accountability. Now we’re getting the veterans the kind of response and the kind of accountability they earned and deserved. And I’m very proud of these members who worked across the aisle to get this done.”

The VA exhibits the worst of government bureaucracy. A major bipartisan VA reform measure will head to the @WhiteHouse this week.
— Paul Ryan (@SpeakerRyan) June 12, 2017

With real accountability, we can begin to make the real changes needed to fix the VA once and for all.
— Paul Ryan (@SpeakerRyan) June 12, 2017

President Trump campaigned on the issue of VA reform and called on the House to pass the legislation last week.

Senate passed the VA Accountability Act. The House should get this bill to my desk ASAP! We can’t tolerate substandard care for our vets.
— Donald J. Trump (@realDonaldTrump) June 7, 2017

Further, VA Secretary David Shulkin made an appearance in the White House briefing room to stress the need for the legislation.