Spicer: We Can't Force Members To Vote Yes on Healthcare 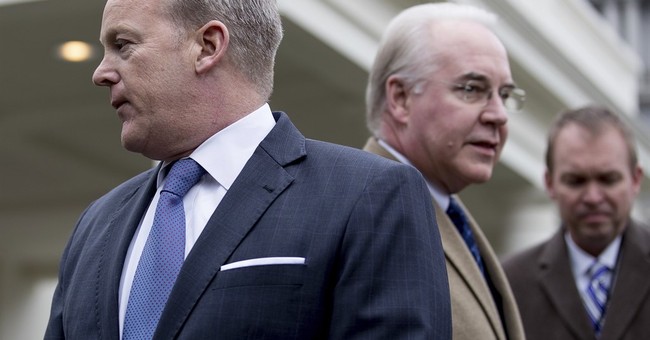 Just one day after saying the White House was going to "win" by passing the American Health Care Act through the House, White House Press Secretary Sean Spicer has changed his tune as current vote totals for the legislation continue to come up short.

"The Speaker has done everything he can, at the end of the day, you can't force people to vote," Spicer said. "At some point, you can honestly only do so much."

Spicer repeatedly said "you can't force someone to do something" during the Friday press briefing, referring to members still opposed to the bill. He also argued if the bill fails, there will be no negative impact on passing the rest of President Trump's agenda, mainly tax reform and an infrastructure bill.

Shortly before the briefing began, House Speaker Paul Ryan held a meeting with President Trump at the White House amid multiple reports the legislation could ultimately be pulled from the floor.

"We've done everything, we've done every single thing. Every meeting, every call, every discussion, every idea has been out there, adjudicated, listened to and now it's time to vote," Spicer said.

A vote has been scheduled for 3:30 p.m. after being delayed Thursday afternoon. Thirty-eight members plan to vote no on the bill, the White House can afford to have only 21 opposed.