Trump Addresses Russian Ship Off U.S. Coast: Best Thing I Could Do is Shoot It Out Of The Water 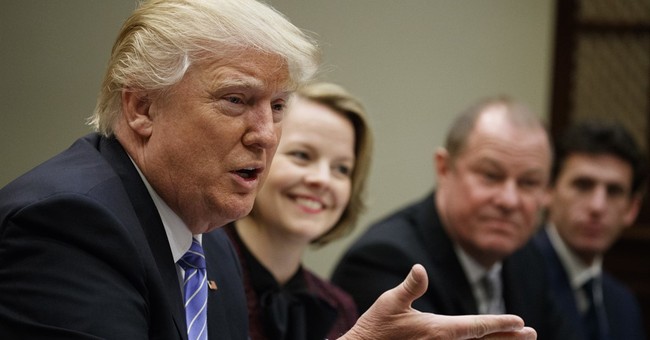 During his first solo press conference as President Thursday, Donald Trump took a barrage of questions from reporters on Russia and slammed the media for dishonestly reporting on the issue.

The false, horrible, fake reporting makes it much harder to make a deal with Russia," he continued.

Repeating an argument he often makes, Trump stated a good relationship with Russia isn't a bad thing and reminded the room of Secretary of State Hillary Clinton's failed reset with the nation under President Obama.

"Hillary Clinton did a reset, remember? With that stupid plastic button that made us all look like a bunch of jerks," Trump said. "If we have a good relationship with Russia, believe me, that's a good thing not a bad thing."

When asked about the Russian spy ship currently patrolling in international waters off the U.S. east coast, Trump argued the best thing for him to do politically would be taking it out. Such action would also be an act of war.

"The greatest thing I could do is shoot that ship that's 30 miles offshore right out of the water," the President said.

The President briefly addressed the resignation of National Security Advisor General Michael Flynn earlier this week, saying the relaying of bad or incomplete information to Vice President Mike Pence about phone calls with the Russian Ambassador was unsatisfactory to him. He referred to Flynn as a "good man."