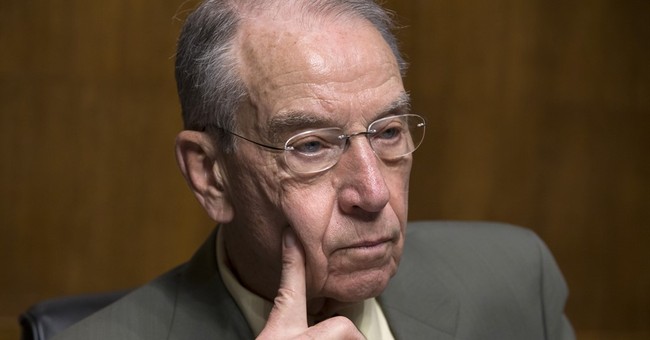 Senate Judiciary Committee Chairman Chuck Grassley is calling on President-elect Donald Trump to reverse President Obama's executive actions and he wants it to start on day one.

"The Obama administration used executive fiat to push sweeping regulations with little thought about the damage to American jobs.  It has repeatedly stretched its authority beyond limits set by Congress. It has twisted the law and even the Constitution itself to justify this executive overreach.  And despite early promises of transparency, it has kept the American people and Congress in the dark about many of its most significant decisions. Americans are right to be frustrated with what they see as more unnecessary burdens and unchecked abuses being handed down by an out-of-touch bureaucracy.  And in November, they made their voices heard," Grassley said on the Senate floor Friday.  "President-elect Trump has said that he intends to roll back the mess of harmful regulations and executive power grabs of the last eight years.  He is certainly going to have his hands full, but there’s plenty he can do to begin the process on January 20th."

"President Obama’s tenure has brought about an unprecedented expansion of the regulatory state.  By some estimates, bureaucratic red tape now places a $2 trillion burden on our nation’s economy. I don’t doubt that there is some good intention behind just about every new rule.  But, the notion that so-called experts in Washington, D.C., need to regulate every aspect of our lives doesn’t make much sense to many of the Iowans I talk to.  They are hoping that a President Trump will bring common sense to Washington, D.C.," he continued.

"The common thread in all this is that the Obama administration frequently failed to take care that the laws be faithfully executed, as is required by our Constitution.  And when that doesn't happen and Congress lets a president get away with it, then we aren't upholding our oath to the Constitution, which says basically that Congress passes the law. They ought to be a check on the executive branch to see that the laws are faithfully executed," Grassley said. "So, a person coming to town to “drain the swamp,” a person by the name of Trump, should prioritize these failures and begin to restore the executive branch to its proper place in government consistent with the checks and balances outlined in our Constitution."

Grassley's remarks also serve as a warning to Trump not to overstep his bounds through executive action once he is officially sworn into office.