Trump Gives Major National Security Speech: There Will Be No Apology Tour 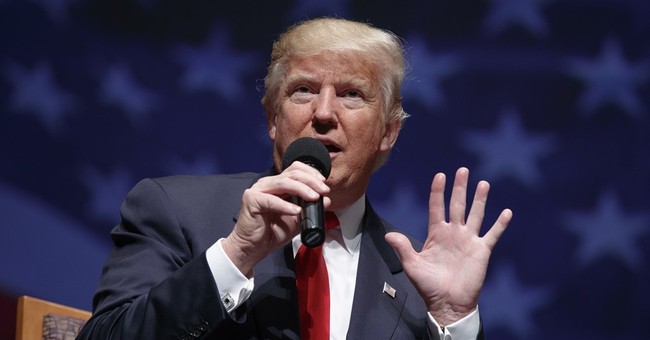 Speaking from Philadelphia Wednesday, GOP presidential candidate Donald Trump laid out his vision for a stronger American military and a safer country while attacking rival Hillary Clinton for a failed record and putting national security at risk.

"Instead of an apology tour, as President Obama has done over and over again, I will proudly promote our system of government and way of life as the best in the world," Trump said. "We will show the whole world how proud we are to be Americans."

Pinning the destabilization of the Middle East and failed regime change in Libya, Syria and Iraq on Clinton, Trump reminded voters about the FBI report dropped last week showing Clinton's gross negligence in handling classified information. Trump brought up details showing staff destroyed phones with hammers and said based on the number of times Clinton couldn't recall important information during the FBI's criminal investigation of her private server, she is unfit for the presidency.


"Her destructive policies have displaced millions of people," Trump said, adding that Clinton's policy of welcoming refugees into the country without proper vetting is reckless.

Trump stressed the need to defeat terrorism by allowing the military to act swiftly to get the job done, without restrictive rules of engagement currently dragging out the war in Afghanistan. He discussed the need to bring new allies to the table while also holding accountable NATO countries failing to pay their fair share, which is two percent of each country's budget.

"We should work with any country that shares the goal of defeating ISIS And radical Islamic terrorists, we're going to form new friendship and partnerships based on this mission and this mission alone," he said. "I will request all NATO nations promptly pay their bills."

Trump went into detail about the damaging effects of the military sequester, put into place through the Budget Control Act of 2011, pointing out defense spending and troops levels are at dangerously low levels not seen since the end of World War II. He also called for investment in a state of the art ballistic missile defense system to protect the United States from enemies around the world.