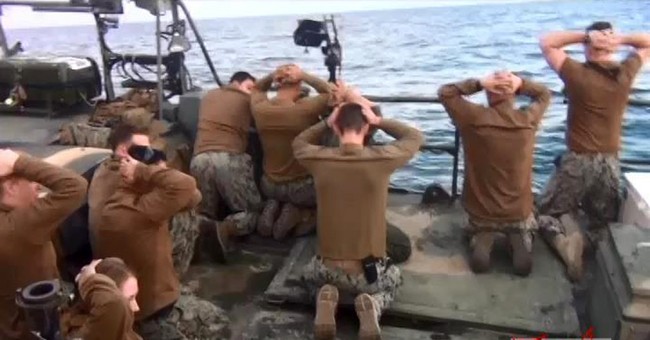 It's been more than a year since President Obama finished his legacy defining nuclear deal with Iran. Since then, Iran has taken more Americans hostage, violated U.N. sanctions by firing off a number of ballistic missiles and took U.S. Navy sailors captive early this year. While in captivity, the Iranian Revolutionary Guard took video of the sailors without boots, forced a female sailor into covering her head and demanded sailors issue apologies for their behavior. That footage was then used as propaganda on Iranian state television, a violation of the Geneva Convention.

Now, the Iranians are harassing U.S. Navy ships in the Persian Gulf and vowing to keep threatening them if they "get too close." Earlier this week USS Destroyer Nitze was swarmed by armed Iranian vessels and just hours later, three more U.S. ships were harassed.

One of the encounters resulted in a U.S. ship firing warning shots at an Iranian patrol boat with a .50 caliber machine gun to ward off a dangerous approach, according to the service.

“This situation presented a drastically increased risk of collision, and the Iranian vessel
refused to safely maneuver in accordance with internationally recognized maritime rules of the road, despite several request and warnings via radio, and visual and audible warnings from both U.S. ships,” Urban said.
“During the encounter, Tempest fired three warning flares in the direction of the IRGCN patrol
vessel while also attempting radio communications and sounding loud audible warnings via loudspeaker. Ultimately, Squall resorted to firing three warning shots from their 50-caliber gun, which caused the Iranian vessel to turn away.”

The White House has essentially chalked all of this up as "bad behavior" instead of acts by an enemy the Obama administration has naively tried to friend. The Iranians are threatening the United States with military force, they just haven't pulled the trigger yet. Someday when they do, we'll look back on all of the warning signs and question how it happened.

An op-ed in USA Today says it best: It's time to stop Iran from humiliating the U.S. and it's time to take their threats seriously.

The swarming boat attack is just what it sounds like: a number of fast boats equipped with missiles and torpedoes attack enemy ships from multiple angles to damage or destroy them as quickly as possible. Recently the Iranians added another dimension to the swarming boats: a vessel known as the Ya Mahdi, a remotely piloted fast patrol boat that can fire rockets or be stuffed with explosives. It is a new version of the boat that attacked the USS Cole in Aden in 2000 at a cost of 17 lives, 39 injuries and severe damage to the ship.

The Pentagon has known about this threat for a long time, and has opted to do next to nothing about it. Focused on big blue water operations, the Navy is behind a curve 20 years in the making.

The Pentagon needs to get its act together and come up with tactics and weapons systems to solve the problem of swarm boat attacks. So, too, must the administration stop pretending Iran is not a real threat. Above all, it is time to end America's humiliation on the high seas.