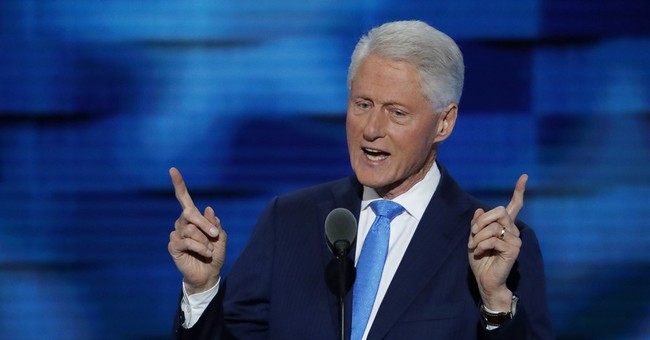 It's been a decades old question: How can liberal feminists support serial sexual harasser and alleged rapist Bill Clinton?

Not only has the "feminist" left ignored or excused Clinton's bad and criminal behavior toward women, they've justified and excused it in the name of the policies he supports for years. They're still doing it. I go into detail about this and Hillary Clinton's enablement in my book Assault and Flattery: The Truth About The Left and Their War on Women.

But the latest excusal comes from Wonkette, where Rebecca Schoenkopf admits Clinton likely raped Juanita Broadderick, but because he called apologize he should be forgiven and simply because he likely raped her doesn't mean he's a "bad feminist."

To sum up, I think Bill Clinton could very well have raped Juanita Broaddrick; that it doesn’t make him an evil man, or irredeemable (I’m Catholic; we’re all forgiven, if we’re sorry, and Broaddrick says Bill Clinton personally called her up to apologize). It doesn’t even necessarily make him a bad feminist — you know, later, once he stops doing that.

As a reminder of what Broaddrick, who was attacked by the Clintons and their inner circle as a crazy and delusional nut job, alleges.

I was 35 years old when Bill Clinton, Ark. Attorney General raped me and Hillary tried to silence me. I am now 73....it never goes away.

Meanwhile, the Clinton campaign has scrubbed the ironic statement that all sexual assault survivors  "deserve to be believed" from Hillary's official campaign website.

A redditor also pointed out that Hillary Clinton’s campaign website appeared to have made some edits to its “campus sexual assault” page. Last winter, website archives show, a September 14, 2015, quote from Hillary ran across the top:

In February, shortly after Broaddrick’s viral tweet made headlines, the line “you have the right to be believed” was cut from the text. A video of the full remarks, that line included, is currently on the page. The Clinton campaign declined to comment on the change.

My how far the meaning of "feminist" has fallen.