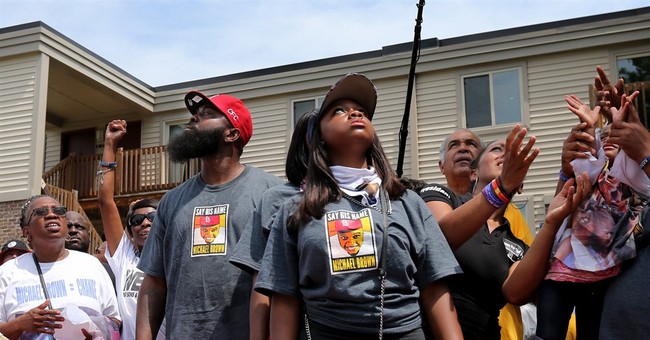 In the summer of 2014, the Black Lives Matter movement was born after a young man named Michael Brown robbed a convenience store and got into a physical altercation with Ferguson Police Officer Darren Wilson. During the altercation, which took place inside Wilson's police cruiser, Brown attempted to take Wilson's gun and was shot and killed. These are the facts, backed up by an outside investigation from Attorney General Eric Holder's Department of Justice.

This is of course wasn't the narrative promoted by the mainstream media or the new BLM movement. Instead, a bogus and false narrative grew and spread: Michael Brown, an "unarmed" teenager, was shot multiple times while he surrendered with his hands up in the air. To this day the BLM movement uses the line, "Hands up, don't shoot!" at protest rallies and events to falsely promote the idea that young black men are being hunted in the streets.

Now, BLM is promoting another false narrative: Israel is an oppressive country carrying out genocide against Palestinians.

He compared it with the accusations of genocide that black activists have leveled at the United States and called the Israeli-Palestinian conflict one of many international conflicts US black activists feel connected to.

“The way we look at it is, we take strong stances,” Ndugga-Kabuye, a New York City organizer for the Black Alliance for Just Immigration, told JTA. “The demand we’re making is we’re against the US continuing funding and military aid to the government of Israel. These are all things that are going to be in debate.”

The platform, released August 2 by The Movement for Black Lives coalition, is largely a statement of the goals of a movement that coalesced around police violence directed against black people in the United States, mass incarceration of African-Americans and other domestic issues.

But it also calls for ending US military aid to Israel and accuses Israel of being an apartheid state. The platform includes a link to a website promoting the movement to boycott, divest and sanction Israel called BDS.

BLM and the Free Palestine movement have many things in common, starting with standing on the far left end of the political spectrum and ending with the promotion of victimhood by falsely accusing the "system" of heinous acts.