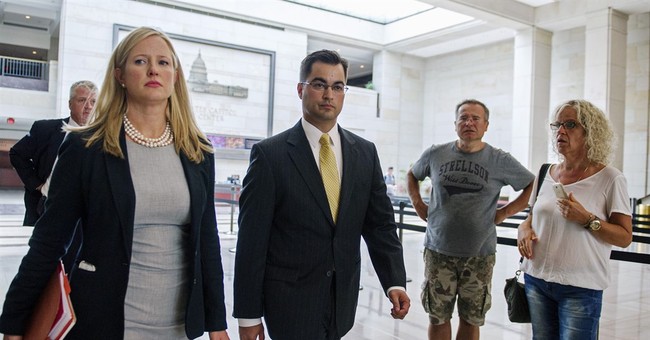 Yesterday former Clinton IT employee Brian Pagliano, who set up Hillary Clinton's private, unsecured server inside her home in Chappaqua, New York, was deposed by Senior Judicial Watch attorney Ramona Cotca. As we now know, Clinton stored at least 2000 pieces of classified information on that server.

During the deposition, Pagliano didn't answer a single question and invoked the Fifth Amendment more than 125 times. Judicial Watch has been doing it's own investigation of server and has filed a number of lawsuits surrounding the issue.

"We were prepared he would be invoking his Fifth Amendment privilege however not to quite to every single question that we asked," Cotca told Fox News Thursday. "He either invoked the Fifth Amendment or his attorney instructed him not to answer because the questions he deemed out of scope. We obviously disagree with that. I don't believe all of the questions dealt with or gave rise to fear of prosecution however that is what happened. Either the privilege was invoked or he refused to answer questions based on what his attorney advised."

Cotca continued by saying Judicial Watch is looking for the truth about the server, specifically why it was set up in the first place. Further, they are looking into how the State Department played a role in allowing Clinton to maintain the server after seeing emails sent back and forth to officials regarding government business.

Naturally, the RNC is all over Pagliano's non-compliance.

“The fact Hillary Clinton’s former IT staffer pleaded the Fifth an astounding 125 times is another reminder of how much she has to hide and how serious the FBI’s criminal investigation really is. It’s important to remember that this wasn’t just any staffer; this was a longtime aide who obtained an unusual political appointment and was paid on the side for the sole purpose of maintaining Clinton’s illicit off-the-books server," RNC Chairman Reince Priebus released in a statement. “This unprecedented arrangement was an obvious attempt to skirt government transparency laws in order to conceal her shady dealings as Secretary of State, and it ultimately led to the exposure of classified information on more than 2,000 occasions and put our national security at risk. Clinton’s extraordinarily reckless conduct and dishonest attempts to avoid accountability do not fit the profile of someone worthy of the highest office in the land. Clinton’s actions in this case alone are disqualifying and her aide’s stonewalling today is just a prelude to the kind of White House she would run.”

Judicial Watch will be questioning top Clinton aide Huma Abedin and State Department Under Secretary for Management Patrick Kennedy next week. According to attorneys, neither are expected to plead the Fifth.