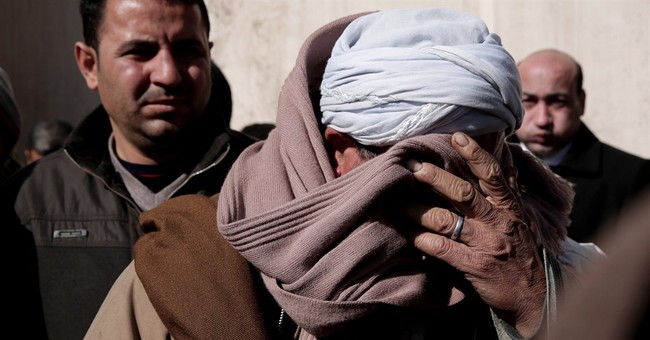 More than 80 Christian homes were torched by a mob of Muslim men this week. Why? They heard a rumor one of the homes was going to be turned into a church and therefore, dozens had to be destroyed. Lisa Daftari over at The Foreign Desk has the details:

The attacks, which took place Friday in Egypt’s Qaryat Al-Bayda village, near Alexandria, left two Copts seriously injured and resulted in thousands of dollars worth of damage, according to a Coptic activist.

"A great deal of fanatic Muslims gathered in front of the new house of my cousin," Mousa Zarif, a Christian who witnessed the events, told Christian advocacy group International Christian Concern.

“They were chanting slogans against us. Among these slogans were, ‘By no means shall there be a church here,’” Zarif said.

Naim Aziz, the Christian man who was building the house, told Daily News Egypt that he was constructing it for his son to live in and not for a church.

The attackers then began chanting traditional Islamic afternoon prayer on loudspeakers aimed at Christian families in the village as they torched their cars and homes, even as police began to arrive, according to ICC.


Christians in North Africa and the Middle East have been under attack for years and things are only getting worse. Last year, 21 Coptic Christians were marched onto a Libya beach by ISIS terrorists and beheaded. Earlier this year, the State Department officially declared a genocide of Christians and other minority religious groups by ISIS a genocide, with emphasis on Syria and Iraq.

The burning of churches and persecution of Christians in Egypt, not by ISIS but Muslims living in the country, is a regular occurrence.