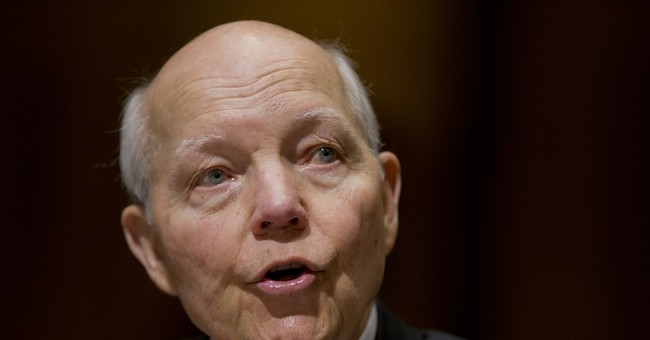 UPDATE: Koskinen is citing a scheduling conflict for the no-show.

IRS's Koksinen tells Judicicary Cmte efforts to impeach him "are without merit.”

IRS's Koskinen to Judiciary Cmte: While I must regrettably decline your invitation I remain willing to appear before the Cmte in the future"

Tomorrow the House Judiciary Committee will hold one of two hearings examining misconduct of IRS Commissioner John Koskinen surrounding the IRS targeting of conservative groups. The Committee will also consider an impeachment resolution for Koskinen, which was introduced by House Oversight Chairman Jason Chaffetz late last year. Koskinen was invited to testify tomorrow, but won't show up.

IRS's Koskinen will not testify at tomrorow's Judicary Cmte hearing looking at misdeeds at the IRS. He had been invited.

"The House Oversight and Government Reform Committee has investigated the targeting of conservative groups for several years and many of the Committee’s members have found that Commissioner Koskinen failed to comply with a congressional subpoena which resulted in destruction of key evidence, made false statements during his sworn congressional testimony, and did not notify Congress that Lois Lerner’s emails were missing," the Judiciary Committee website states.

Last week a censure resolution was introduced for Koskinen, giving him the option to resign from his position or be removed through impeachment proceedings.

“The resolution seeks Commissioner Koskinen’s resignation or removal, and requires the forfeiture of his pension. Censure affords Congress additional consequences to consider in identifying appropriate penalties for the Commissioner’s misdeeds. Mr. Koskinen must be held accountable for his misconduct. I am committed to using every tool at my disposal to hold Mr. Koskinen responsible for his offenses toward Congress and toward the American people. I view censure as a precursor to impeachment as it allows the House the opportunity to formally condemn Mr. Koskinen,”Chairman Chaffetz released in a statement Wednesday.

The second hearing evaluating Koskinen's wrongdoing will be held in June.