Resign or Be Removed: Censure Resolution Introduced for IRS Commissioner 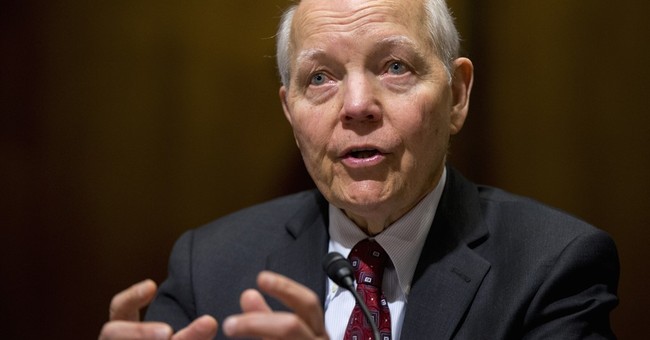 House Oversight Committee Chairman Jason Chaffetz has introduced a resolution to censure IRS Commissioner John Koskinen for his stonewalling of the congressional investigation into IRS targeting of conservative groups.

“The resolution seeks Commissioner Koskinen’s resignation or removal, and requires the forfeiture of his pension. Censure affords Congress additional consequences to consider in identifying appropriate penalties for the Commissioner’s misdeeds. Mr. Koskinen must be held accountable for his misconduct. I am committed to using every tool at my disposal to hold Mr. Koskinen responsible for his offenses toward Congress and toward the American people. I view censure as a precursor to impeachment as it allows the House the opportunity to formally condemn Mr. Koskinen,” Chaffetz released in a statement Wednesday.

Here are the details of Koskinen's alleged wrongdoing:

-Failure to comply with a subpoena resulting in destruction of key evidence.
-Failed to locate and preserve IRS records in accordance with a congressional subpoena and an internal preservation order where 422 backup tapes containing as many as 24,000 of Lois Lerner’s emails – key pieces of evidence - were destroyed on Koskinen’s watch.
-Failure to testify truthfully under oath and provided false and misleading information.
-Falsely testified the IRS turned over all emails relevant to the congressional investigation, including all of Ms. Lerner’s emails.
-Falsely testified emails were unrecoverable once the agency realized some of Ms. Lerner’s emails were missing.
-Failure to notify Congress key evidence was missing.
-Despite destroying Lois Lerner’s emails on March 4, 2014, the IRS did not notify Congress the emails were missing until June 2014.

Late last year Chaffetz introduced an impeachment resolution for Koskinen, which the House Judiciary Committee will examine in a hearing next week.