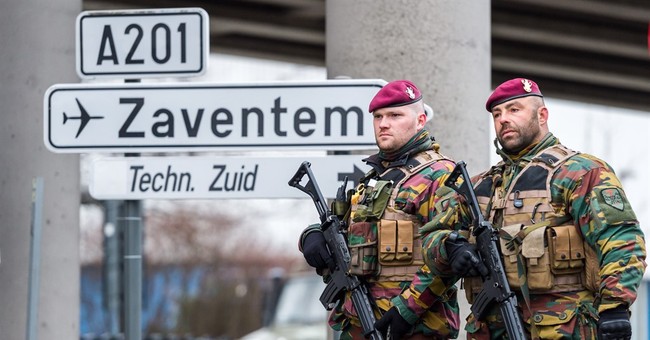 After years of open border policies and self-segregation in Belgium, Brussels has become what intelligence officials call a "rats nest" of Islamic terrorism.

When Paris was attacked by Islamic terrorists last fall, leaving 130 people dead and hundreds more wounded, they came from the Molenbeek neighborhood in Brussels. Yesterday's suicide bombers at the Brussels airport and subway system also came from Molenbeek. Now, officials inside the country are admitting they are overwhelmed by the number of terrorism leads and investigations underway and are admitting it's impossible to stop attacks from occurring. Buzzfeed has the story:

One Belgian counterterrorism official told BuzzFeed News last week that due to the small size of the Belgian government and the huge numbers of open investigations — into Belgian citizens suspected of either joining ISIS, being part of radical groups in Belgium, and the ongoing investigations into last November’s attacks in Paris, which appeared to be at least partially planned in Brussels and saw the participation of several Belgian citizens and residents — virtually every police detective and military intelligence officer in the country was focused on international jihadi investigations.

“We just don’t have the people to watch anything else and, frankly, we don’t have the infrastructure to properly investigate or monitor hundreds of individuals suspected of terror links, as well as pursue the hundreds of open files and investigations we have,” the official, who spoke on condition of anonymity because he was not authorized to speak to the media, said.

Meanwhile, U.S. Security officials are slamming Belgian security as "sh*tty" after locking down the city for months and still failing to prevent Tuesday's attacks. From the Daily Beast:

Americans claim the Belgians are like clueless ‘children’ who are too incompetent to handle today’s terror threat.

U.S. counterterrorism officials are frustrated and angry at Belgium’s inability to tackle ISIS terror cells that are successfully plotting murderous attacks on the West from inside the country’s tiny capital city.

Here at home, U.S. security officials and law enforcement agencies have boosted security at airports and transit systems around the country and plans for changes outside airport security are already in the world.