Obama: The Current [Failing] Strategy We're Putting Forward Against ISIS Is Ultimately The One That Will Work 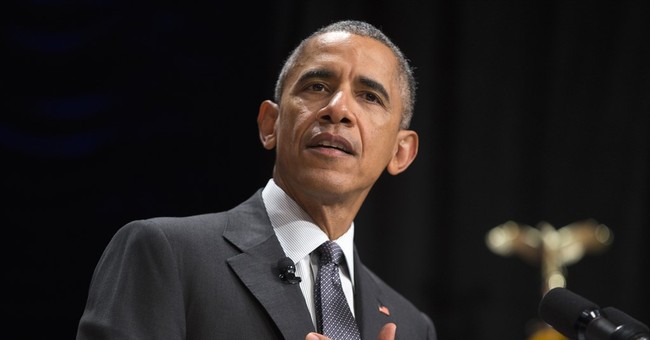 Speaking from Turkey Monday at the G20 Summit, President Obama showed no signs of changing his strategy against ISIS as criticism of the administration's failed campaign against the terror army continues to mount.

"The [ISIS] strategy that we are putting forward is ultimately the strategy that is going to work," Obama said. "It's important to look at what we're already doing."

For over a year, Obama's top military commanders, the former CIA director and retired generals have expressed grave concern the current strategy from the Obama administration is failing.

"We've had an ISIS affiliate in the Sinai apparently - we don't know for sure yet - bringing down an airliner, only the third airliner brought down by a bomb in the last quarter century. And we've had the second largest terrorist attack in Western Europe since 9/11, the largest since Madrid in 2004," Michael Morell, CBS News' senior national security contributor, said on "Face the Nation" Sunday. "When you put those two things together and you put together this attempt to build an attack capability in the West, I think it's now crystal clear to us that our strategy, our policy vis-à-vis ISIS is not working and it's time to look at something else."

"Half‐hearted or tentative efforts, or air strikes alone, can backfire on us and actually strengthen our foe’s credibility, reinforcing his recruiting efforts which are already strong. I do not necessarily advocate American ground forces at this point, but we should never reassure our enemy that our commander‐in‐chief would not commit them at the time and place of his choosing. When we act it should be unequivocal, designed to end the fight as swiftly as possible. While no one is more reluctant to see us again in combat than those of us who have signed letters to the next of kin of our fallen, if something is worth fighting for we must bring full strength to bear."

President Obama had been given advice on how to handle the Islamic State of Iraq and the Levant but did not act on it, according to a new report from Real Clear Defense.Obama was preparing his strategy when he rejected the “best military advice” of Gen. Lloyd Austin, commander of U.S. Central Command.

Airstrikes have halted the advance of the Islamic State, also known by the acronyms ISIS or ISIL, General Odierno, now the Army chief of staff, told journalists from four news organizations, including The New York Times, in what aides said were his first public comments on the current situation in Iraq. Ultimately, though, “you’ve got to have ground forces that are capable of going in and rooting them out,” he said, referring to the Islamic extremists.

The airstrikes “will not be the end all and be all solution in Iraq,” he said. Similarly, he added, the jihadis cannot be allowed to have a safe haven across the border in Syria.

"In my military mind what you have is Operation Enduring Confusion. You have a President who cannot make up his mind about what he wants."

"I've spent my whole life hanging around the U.S. military. I've been on plenty of times with you from Iraq and other places. I've spent my life with these young guys. I'm waiting for the general or admiral who will stand up on his hind feet and say this is mission impossible. Given the constraints that you've [Obama] given we cannot accomplish the objective you have set. It is impossible to do."

"Somebody has to tell the truth...Some general or admiral at the Pentagon or somewhere else in Central Command has got to stand up and say, 'The mission we've been given we can do but we can't with the constraints you've places upon us.'"


Further, top members of Obama's own political party are now criticizing the strategy against ISIS and calling for a review.

Democratic Sen. Dianne Feinstein suggested that the president is perhaps “too cautious” with regards to establishing a strategy to curb the violence in Iraq and Syria.

“I think I’ve learned one thing about this president, and that is he’s very cautious. Maybe in this instance, too cautious,” Feinstein said Sunday on NBC’s Meet the Press. She added that the military and the State Department “have been putting plans together. And so hopefully, those plans will coalesce into a strategy that can encourage that coalition from Arab nations.”

At this point, there is zero indication from the White House any kind of U.S. strategy will change despite the ISIS attack on Paris last week and the promise from fighters they'll strike inside the United States.