Exposing The Black Lives Matter Movement For What It Is: Promotion of Cop Killing 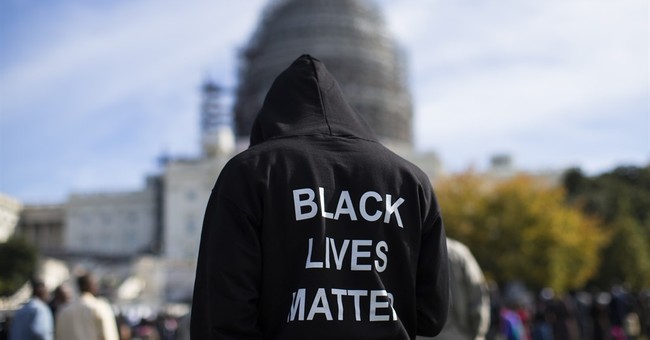 It's time to expose the Black Lives Matter [BLM] movement for what it is: a racist, violent hate group that promotes the execution of police officers. The evidence is in their rhetoric and written on their shirts.

If you take a look at the Black Lives Matter Twitter feed, you'll find photos of activists wearing shirts that say, "Assata Taught Me."

They're referring to infamous cop killer Assata Shakur, otherwise known as Joanne Chesimard, who shot and killed a New Jersey State Trooper back in 1973. In 1977, Shakur was convicted and sentenced to prison but quickly escaped and has been a fugitive in Cuba ever since. She's also on the FBI's most wanted terrorism list. BLM glorifies Shakur as a hero and uses her writings and materials during training sessions. Lee Stranahan has more:

BlackLivesMatter—the activist group that demands a “racial justice agenda” that includes constant criticism and activism against police—invokes the words of convicted cop killer Assata Shakur at “all its events.”

At a recent event for female bloggers, BlackLivesMatter leaders had a crowd of thousands repeating lines from a letter written by Shakur that include an explicit reference to the Communist Manifesto.

The BlackLivesMatter group, which has met with President Obama and largely been given a free pass by the media, has skyrocketed to national prominence after its involvement with unrest and rioting in Ferguson, Baltimore, and a recent takeover of events the Netroots Nation conference for progressive Democrats in Phoenix, Arizona.

Assata Shakur, who has been living in exile in Cuba for over thirty years, is a hero to communist revolutionaries for her involvement in the 1960s and 1970s with a violent, criminal Black Panther Party offshoot called the Black Liberation Army. Shakur and the group robbed several banks as a revolutionary act and eventually killed a New Jersey State Trooper with his own gun after a highway stop in 1973.

Former Black Panther Party member Kathleen Cleaver, who is a supporter of Shakur, is "thrilled" about the BLM movement.

TR: So what do you think of Black Lives Matter?

KC: I’m thrilled to see such concern for the community. I think Black Lives Matter is exhilarating, exciting, and I’m really glad that it’s here.

Now, onto those who condone this behavior and the rhetoric being used.

Not only have the leaders of the Democrat Party refused to condemn the movement, they've desperately tried to embrace it. In the age of Obama, where Democrats thrive on division and embrace a racial justice narrative, this isn't surprising.

Last week at the DNC summer meeting in Minneapolis, a resolution was passed in solidarity with the movement. BLM later rejected it.

"The DNC joins with Americans across the country in affirming ‘Black lives matter’ and the ‘say her name’ efforts to make visible the pain of our fellow and sister Americans as they condemn extrajudicial killings of unarmed African American men, women and children," the solidarity resolution states.

The day after the resolution was passed, BLM activists in Minneapolis chanted, "pigs in a blanket, fry em' like bacon," as they marched down the street. This rhetoric also came just one day after the execution of Texas Sheriff Deputy Daron Goforth while he was filling up his patrol car at a local gas station. If you aren't familiar, "pigs in a blanket" refers to the bodies of dead police officers in body bags.

Last night I made an appearance on The Kelly File to discuss BLM (the segment wasn't cut short, we just ran out of time).

Despite Richard Fowler's claims that he's "watching a different Black Lives Matter movement," we aren't and the calls for police executions are not isolated incidents (he also lied about the Tea Party connection to the Tucson shooting of former Congresswoman Gabriel Giffords, there wasn't a connection as he claims but that's a topic for a other post). In December the man who killed two NYPD officers while they were eating lunch in their patrol car posted on his Instagram page, "Going to put pigs in a blanket" before carrying out his killings. In Ferguson when news of the NYPD slayings hit, BLM protestors chanted and celebrated, "Pigs in a blanket!" We saw the same over the weekend in Minneapolis. This isn't happening in one place, it's happening around the country. BLM activists are using their own words and inspiration from convicted cop killers to promote the assassination of police officers.

Finally, it's important to point out two-thirds of the African American community flat out reject BLM or strongly disagree with the movement's tactics. From the Washington Post:

The baby boomers who drove the success of the civil rights movement want to get behind Black Lives Matter, but the group’s confrontational and divisive tactics make it difficult. In the 1960s, activists confronted white mobs and police with dignity and decorum, sometimes dressing in church clothes and kneeling in prayer during protests to make a clear distinction between who was evil and who was good.

But at protests today, it is difficult to distinguish legitimate activists from the mob actors who burn and loot. The demonstrations are peppered with hate speech, profanity, and guys with sagging pants that show their underwear. Even if the BLM activists aren’t the ones participating in the boorish language and dress, neither are they condemning it.

"It's a racist movement, racist to the core...denounce the Black Lives Movement and replace it with All Lives Matter."