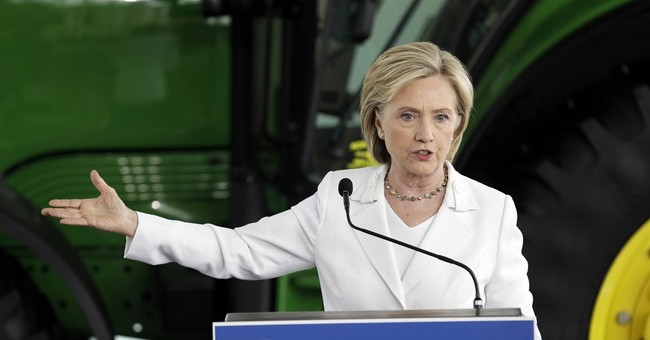 Things are rapidly getting worse in the legal department for former Secretary of State and democratic presidential candidate Hillary Clinton.

The State Department is set to release a batch of 6,000 personal emails belonging to Clinton tonight, but we're already getting a sneak peak of what they contain.

That's right, 150 more documents flagged for classified information. This news comes on top of revelations earlier this month Clinton had at least 300 classified documents passing through her private email server, which intelligence officials are almost certain was hacked by foreign governments. Also keep in mind that out of hundreds of classified documents, at least two found in Clinton's system were deemed top secret (the highest level of classification).

As Guy wrote about last week, the FBI is reportedly using it's "A-Team" to investigate the legal aspects of Clinton's inappropriate handling of classified information with the prosecutor who took down General David Petraeus leading the way. Felonies for Clinton could be on the table if she is in fact indicted.

An FBI "A-team" is leading the "extremely serious" investigation into Hillary Clinton's server and the focus includes a provision of the law pertaining to "gathering, transmitting or losing defense information," an intelligence source told Fox News. The section of the Espionage Act is known as 18 US Code 793. A separate source, who also was not authorized to speak on the record, said the FBI will further determine whether Clinton should have known, based on the quality and detail of the material, that emails passing through her server contained classified information regardless of the markings. The campaign's standard defense and that of Clinton is that she "never sent nor received any email that was marked classified" at the time. It is not clear how the FBI team's findings will impact the probe itself. But the details offer a window into what investigators are looking for -- as the Clinton campaign itself downplays the controversy...A leading national security attorney, who recently defended former CIA officer Jeffrey Sterling in a leak investigation, told Fox News that violating the Espionage Act provision in question is a felony and pointed to a particular sub-section...The Clinton campaign did not provide an on-the-record comment on the matter when given questions by Fox News.