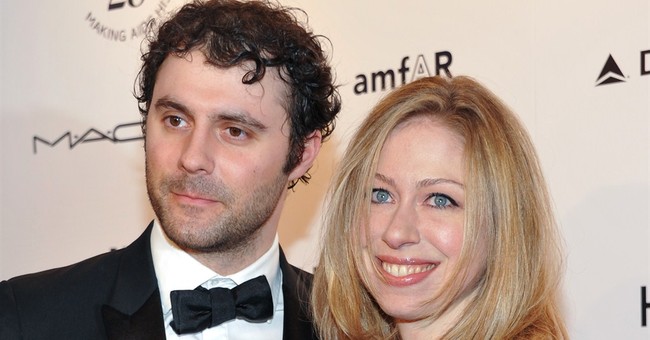 In case you missed it over the weekend, Hillary Clinton gave a speech attacking hedge fund managers.

"While many of you are working multiple jobs to make ends meet, you see the top 25 hedge fund managers making more than all of America’s kindergarten teachers combined. And, often paying a lower tax rate," she said during the official launch of her 2016 presidential campaign.

There's just one problem. Chelsea Clinton, Hillary Clinton's daughter, is married to Marc Mezvinsky. Mezvinsky is not just a hedge fund manager, but a co-founder of a hedge fund. And how did he get a number of his big money investors? Through his ties to the Clintons. From the New York Times:

Being part of the Clinton family has provided Mr. Mezvinsky with another perk: access to wealthy investors with ties to the Clintons.

When Mr. Mezvinsky and his partners began raising money in 2011 for a new hedge fund firm, Eaglevale Partners, a number of investors in the firm were longtime supporters of the Clintons, according to interviews and financial documents reviewed by The New York Times. Tens of millions of dollars raised by Eaglevale can be attributed to investors with some relationship or link to the Clintons.

Identifying who put money into Eaglevale, a roughly $400 million fund that has had underwhelming returns for much of its brief history, is difficult because hedge funds do not publicly disclose their investors. Still, the overlap between at least some of Eaglevale’s investors and backers of the Clintons illustrates how politics and finance can intersect and shows the fine line the Clinton family must navigate as their charitable and business endeavors come under scrutiny in an election cycle.

I wonder how many kindergarten teachers could be paid with Mezvinsky's salary. Chelsea and her husband live in a $10.5 million Manhattan penthouse.

Hillary Clinton insists she isn’t “well-off” and now daughter Chelsea, according to a recent interview, claims she couldn't care less about money.

“I was curious if I could care about (money) on some fundamental level, and I couldn’t,” she told Fast Company in an interview that ran in the magazine's May edition, explaining why she gave up lucrative gigs to join her family’s philanthropic foundation.