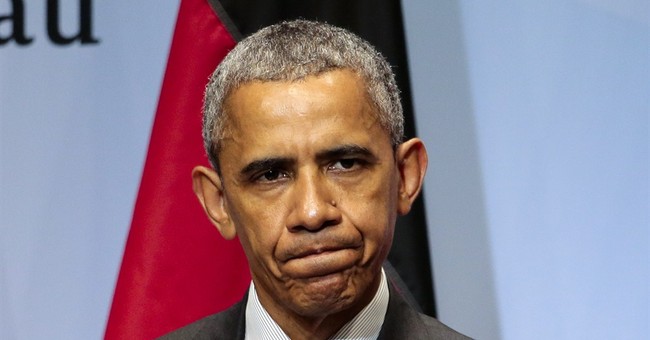 Speaking during a press conference today in Germany as part of the G7 Summit, President Obama ripped the Supreme Court for taking up King v. Burwell, the case questioning the legality of Obamacare subsidies given to people living in states without state based exchanges.

"This should be an easy case. Frankly, it probably shouldn't even have been taken up," Obama said

Obama again voiced that confidence on Monday, and urged the court not to rule otherwise.

He said it's safe to "assume" the court will do what most legal scholars expect and "play it straight." Obama said it has been well-documented that Congress never intended to exclude people who went through the federal exchange.

To rule the other way, the president said, would be a "contorted reading of the statute" and a "twisted interpretation."

But if that does happen, Obama said, "that throws off how that exchange operates" and millions of people would lose subsidies.


Obamacare architect Jonathan Gruber, infamous for saying the law passed thanks to the "stupidity of the American voter," has repeatedly said people living in states that do not have their own exchanges cannot receive tax subsidies for Obamacare. He's argued multiple times the law was set up to force states into setting up exchanges.

"I think what's important to remember politically about this is if you're a state and you don't set up an exchange that means your citizens don't get their tax credits. But your citizens still pay the taxes that support this bill. So you're essentially saying to your citizens, you're going to pay all the taxes to help all the other states in the country. I hope that that's a blatant enough political reality that states will get their act together and realize there are billions of dollars at stake here in setting up these exchanges and that they'll do it, but you know once again the politics can get ugly around this," Gruber said.


If subsidies are deemed illegal, the already weakened structural integrity of Obamacare will suffer another major blow and Obamacare enrollees will better understand how expensive the "Affordable" Care Act really is.

2) What happens if the court rules against the Obama administration?

According to the Department of Health and Human Services, more than 6 million people would lose their subsidies in the states where the federal government operates the health insurance exchanges.

An analysis from the Kaiser Family Foundation found that subsidized enrollees would face an average effective premium increase of 287 percent if the court rules against the administration. (Kaiser Health News is an editorially independent program of the foundation).

Florida would have the most people lose subsidies (1.3 million), worth nearly $400 million, with Texas ranked second in both categories (832,000 residents losing $206 million per month), according to the state-by-state analysis.

Even people who weren't getting subsidies could be indirectly affected by a Supreme Court ruling against the administration. That's because the elimination of subsidies would likely roil the insurance risk pool. Without the subsidies, many healthy people are likely to give up their coverage and that would drive up costs for those continuing to buy insurance.

The Obama administration has argued the legislative language was written improperly to imply state based exchanges must be set up for people to receive Obamacare subsidies and maintains the law was not structured that way. Gruber's comments repeatedly prove otherwise.

This isn't the first time President Obama has openly and publicly scolded the Supreme Court. During his 2010 State of the Union Address, Obama chided Justices for their Citizen's United ruling.

A decision on King v. Burwell will be released by the Court sometime this month.