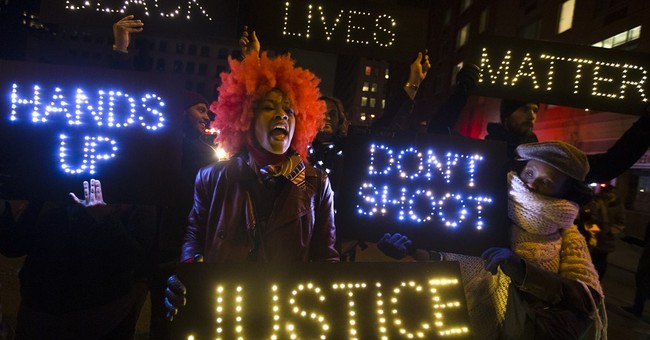 Editor's note: This column originally appeared in the January issue of Townhall Magazine.

By now you’ve heard all about the situation in Ferguson, Missouri, but the story protestors and those “seeking racial justice” continue to believe and use as justification for violence is based on a lie thanks to the language and actions of professional race-baiters including, but not limited to, President Obama, Attorney General Eric Holder, MSNBC host Al Sharpton, and Baptist minister Jesse Jackson.

Back in August when Ferguson first gained infamy, the initial story told to the media and proliferated by race baiting activists went something like this: “An innocent, young, unarmed, gentle giant, black teenager was walking down the street with his hands up and yelling 'don’t shoot' when a blood thirsty, racist white cop shot him in the back six times.”

Fast forward three months and the facts and forensic evidence show that Michael Brown wasn’t shot in the back and it can be credibly argued that if Brown were still alive, Officer Darren Wilson wouldn’t be.

After careful analysis of evidence and hearing more than 70 hours of testimony from 60 different people, including African-Americans, a grand jury made the decision not to indict Officer Wilson in the killing of Brown. Forensic evidence shows Brown attempted to take Wilson’s gun during a fight inside the police car. It was a clear-cut self-defense case.

Regardless, the non-indictment set off a firestorm of riots and disruptive protests around the country. The first version of the Ferguson story, about a racist white cop shooting a black kid, lived on as buildings were burned to the ground and as traffic was blocked on major freeways in cities across the country.

Despite what Sharpton, Holder, Obama, Jackson and the people who follow their lead would have America believe, this case had nothing to do with race, unless of course you count Brown’s animosity against white police officers. To Attorney General Holder that doesn’t matter, the narrative does, and he’s used the Department of Justice to make sure it’s upheld.

“Michael Brown’s death was a tragedy. This incident has sparked a national conversation about the need to ensure confidence between law enforcement and the communities they protect and serve. While constructive efforts are underway in Ferguson and communities nationwide, far more must be done to create enduring trust. The Department will continue to work with law enforcement, civil rights, faith and community leaders across the country to foster effective relationships between law enforcement and the communities they serve and to improve fairness in the criminal justice system overall,” Holder said after the grand jury announcement, reminding the media of DOJ’s separate investigation into non-existent civil rights violations in the case.

In the beginning of December, Obama used an entire day at the White House to meet with civil rights leaders about Ferguson, Sharpton included. He discussed how to “rebuild” the trust between law enforcement and local communities of color while ignoring the devastated relationship between the Department of Justice and law enforcement officers around the country since Obama and Holder took office in 2009.

“The hyper-politicization of justice issues has made it immeasurably more difficult for police officers to simply do their jobs. The growing divide between the police and the people—perhaps best characterized by protesters in Ferguson, Mo., who angrily chanted, “It’s not black or white. It’s blue!”—only benefits members of a political class seeking to vilify law enforcement for other societal failures. This puts our communities at greater risk, especially the most vulnerable among us," former FBI Assistant Director and Law Enforcement Legal Defense Fund President Ron Hoskorecently wrote in a letter to President Obama. "Your attorney general, Eric Holder, is chief among the antagonists. During his tenure as the head of the Department of Justice, Mr. Holder claims to have investigated twice as many police and police departments as any of his predecessors. Of course, this includes his ill-timed decision to launch a full investigation into the Ferguson Police Department at the height of racial tensions in that community, throwing gasoline on a fire that was already burning. Many officers were disgusted by such a transparent political maneuver at a time when presidential and attorney general leadership could have calmed a truly chaotic situation."

After fanning the flames of racial tension for months, Obama and Holder had the audacity to call for calm as rioters in Missouri burned down buildings, destroyed cop cars, and trashed small businesses. All of these actions could have been avoided without the lie of “hands up, don’t shoot.”

Meanwhile, Obama and Holder failed to condemn Brown’s criminal behavior. There has been no acknowledgement from the two most powerful men in American about Brown’s criminal behavior toward Officer Wilson or about the strong armed robbery he committed against an innocent shop owner that ultimately put him in contact with Wilson in the first place. With his own criminal behavior, Brown set the stage for the looters and rioters that followed his path in the name of justice and peace. Holder and Obama are simply carrying on his legacy in order to fulfill their own racial agenda.