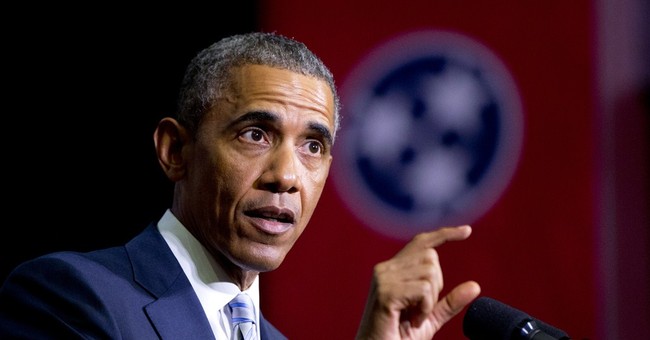 As the old saying goes, there are two things that are certain in life, death and taxes. Tomorrow night during his 2015 State of the Union speech, President Obama will announce that people paying taxes their entire lives just isn't good enough. The President wants the current 40 percent death tax rate increased to 60 percent. Americans for Tax Reform breaks down the details:

Under the Obama proposal, when you inherit an asset your basis will simply be the decedent's original basis.

There are exemptions for most households, but this misses the larger point: the whole reason we have step up in basis is because we have a death tax. If you are going to hold an estate liable for tax, you can't then hold the estate liable for tax again when the inheritor sells it. This adds yet another redundant layer of tax on savings and investment. It's a huge tax hike on family farms and small businesses.

It's like a second death tax (the first one has a top tax rate of 40% and a standard deduction of $5.3 million/$10.6 million for surviving spouses). Conceivably, an accumulated capital gain could face a 40% death tax levy and then a 28% capital gains tax on what is left. Do the math, and that's an integrated federal tax of just under 60% on inherited capital gains.

Just last week Obama announced he wants "free" community college for "those who work for it," but his latest tax actually punishes those who are saving to pay for college on their own without the government's help.

Under current law, 529 plans work like Roth IRAs: you put money in, and the money grows tax-free for college. Distributions are tax-free provided they are to pay for college.

Under the Obama plan, earnings growth in a 529 plan would no longer be tax-free. Instead, earnings would face taxation upon withdrawal, even if the withdrawal is to pay for college. This was the law prior to 2001.

Obama's plan totals $380 billion in new taxes and it isn't just "on the rich" or the "one percent" as the President and officials in his administration claim. The majority of his newly proposed taxes, including more taxes on hard earned retirement plans, are a direct hit on the middle class and his big government spending will saddle all Americans with crushing debt for decades to come.

Also as a reminder, the middle class has significantly shrunk since 2009 and the poverty rate has increased as a result of President Obama's "redistribution of wealth" economic policies. To make matters worse, the vast majority of Americans are living paycheck-to-paycheck.

While the Obama administration has trumpeted job growth in recent months, the middle class is taking home a shrinking portion of the country's income. Deep job losses in occupations such as construction, information technology, manufacturing and insurance are not likely to recover. Middle-class families also saw nearly 30 percent of their wealth disappear over the past decade, while the cost of goods and services they rely upon steadily climbed.

The swift contraction of the middle class has left most Americans fearful they may be unable to maintain their standard of living.


The silver lining in all of this is that Obama's latest tax hike proposals likely won't pass and neither will his budget. Republicans and Democrats have roundly rejected Obama's budgets since he came into office in 2009, not a single one has passed.

"Democrats are demanding, yet again, tax increases on America. This never ends," ATR President Grover Norquist released in a statement. "When it comes to tax hikes Democrats are like a teenage boy on a prom date: they keep asking the same question different ways but always to the same point."