BREAKING: Border Bill Back On Deck, Members Plan to Take Action Before Recess 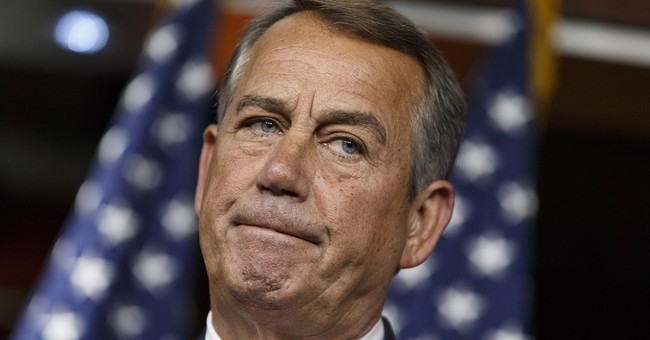 Update (Amanda): House leadership announced that members will stay until a vote on border legislation takes place. Currently, there is no set schedule for the vote. It could take place late Thursday or Friday.

#BREAKING Sr Hse GOPer after border mtg: I know 1 thing, we're not leaving here until we get the votes."

House leadership has pulled a border security bill from the floor, which means it will not receive a vote before Congress goes on their August recess tomorrow. The bill was pulled due to a lack of support and the necessary vote threshold could not be met.

Boehner says nothing about pulling bill and what's next as he walks to chamber.

Here are details on what the bill would have done from Speaker Boehner's office:

-Makes changes to a 2008 law to expedite the return of unaccompanied minors to their home countries by treating Central American children the same as those from Mexico. President Obama and members of his administration have repeatedly called for such a change, characterizing it as a “bipartisan priority.”

-Prohibits the Interior and Agriculture secretaries from limiting the activities of Customs and Border Patrol (CBP) agents on federal public lands within 100 miles of the U.S.-Mexico border.
Provides funding for National Guard troops at the southern border which, as Speaker Boehner noted in a letter to the president last month, are “uniquely qualified to respond to such humanitarian crises” and will “relieve the border patrol to focus on their primary duty of securing our border.”

-Pares down the president’s $3.7 billion request to $659 million, which is fully offset by cuts and recessions to existing funds, and specifically targets all funding toward addressing the most immediate needs at the border.

-Provides additional resources for U.S. Immigration and Customs Enforcement (ICE) and CBP operations aimed at securing the border, increasing detention space, and expediting the processing and deportation of unaccompanied children and families.

-Increases the number of temporary immigration judges to enhance the capacity of the immigration court system, allowing the courts to process more cases and reduce the lengthy wait periods between detention and removal.

-Prioritizes repatriation assistance to Guatemala, Honduras, and El Salvador from within existing foreign aid funding to facilitate the return and reintegration of children in their home countries.

-Expresses the Sense of the Congress that unauthorized migrants should not be housed on military installations unless certain conditions are met.

Over on the Senate side, Republican Senators Jeff Sessions and Ted Cruz have voiced loud opposition against the House bill.