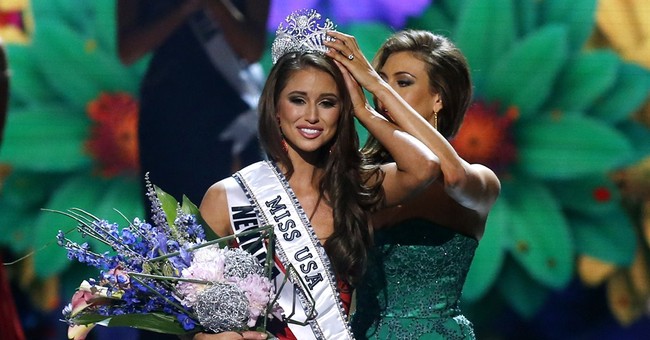 'We shouldn't teach women self-defense so they can avoid being raped, rather we should only teach men it is bad to rape.'

That's the logic coming from leftist feminists in response to Miss Nevada Nia Sanchez, now Miss USA, suggesting last night that women should learn self-defense in order to prevent or avoid being sexually assaulted. Sanchez is a fourth degree black belt in taekwondo.

First, Miss Nevada's suggestion during Miss USA last night and after she won the title:

“I believe that some colleges may potentially be afraid of having a bad reputation and that would be a reason it could be swept under the rug, because they don’t want that to come out into the public,”Nia Sanchez said. “But I think more awareness is very important so women can learn how to protect themselves. Myself, as a fourth-degree black belt, I learned from a young age that you need to be confident and be able to defend yourself. And I think that’s something that we should start to really implement for a lot of women.”

Miss Nevada might be gorgeous, but needs to realize teaching self defense to women isn't the solution for ending sexual assault #YesAllWomen

I get that the college sexual assault problem can't be solved in 30 secs but still icky to pretend like self defense is the answer. #MissUSA

Got that? Self defense is icky. That came from Elisa Benson, who is the community manager at one of the world's largest women's magazines, Cosmopolitan.

“Teach men not to rape.” - because it’s not universally understood that rape is wrong. #morons


Here's a suggestion: Let's keep teaching everyone that rape is barbaric while also teaching women about self-defense should they find themselves in a bad situation. We can and should do both.