Jindal: Obamacare Can and Should Still Be Repealed 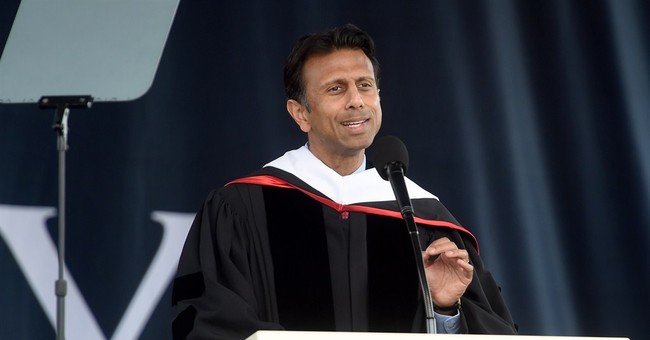 A few weeks ago Kentucky Senator Rand Paul, who is no doubt a serious candidate for the 2016 presidential election, essentially said Obamacare would be very difficult at this point to repeal.

“I think it’s going to be difficult to turn the clock back. People get assumed and accustomed to receiving things, particularly things that they get for free,” he told a crowd of students at Harvard’s Institute of Politics on Friday

Writing in an op-ed for FoxNews.com today, Louisiana Governor Bobby Jindal (also a possible 2016 presidential candidate) seems to be firing back at that notion by arguing not only can Obamacare be repealed, but the hard work to get it done must continue. (bolding is mine)

According to those in the elite salons of Washington, ObamaCare cannot be repealed. The conventional wisdom on the cocktail circuit contends that once you mandate health insurance for millions, you cannot unmandate it. This theoretical belief has become accepted in Washington as a dogmatic article of faith. And the Obamacrats and most of the press believe that repeating this mantra often enough will make it so.

Of course, many Beltway insiders claim that ObamaCare cannot be repealed because they wish to preserve the financial windfalls the law has brought them.

But even many conservative “thinkers” in Washington have given in to ObamaCare fatalism. They may not say so in public, but they fully believe that talk of the law’s repeal exists only in the land of unsophisticated rubes.

The country that won two world wars and put a man on the moon cannot, it is believed, repeal a disastrous public policy. Says who? Why not?

The idea that ObamaCare cannot be repealed defies both logic and real world justification, on multiple levels.


Shots fired? Jindal has never been shy about taking on Washington politicians on both sides of the aisle, but as we inch closer to 2016, anti-Washington talking points and arguments are sure to heat up outside the Beltway. Further, Obamacare won't only be a major issue for the 2014 midterms, but for the 2016 presidential election as well.

UPDATE: I should add Jindal has launched an organization, America Next, with a goal of promoting conservative based healthcare reform.