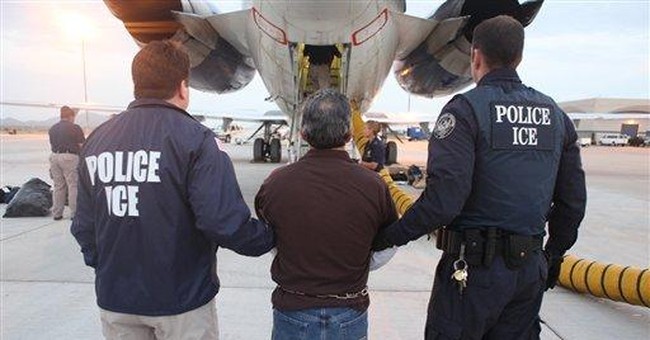 According to a new report from the Center for Immigration Studies by Director of Policy Studies Jessica Vaughn, the Obama administration has allowed tens-of-thousands of violent illegal aliens to go free inside the United States and without deportation. An analysis of Immigration and Customs Enforcement data shows 68,000 convicted criminals were released in 2013. According to Department of Homeland Security policy, an individual is only determined to be a criminal alien if they have a criminal conviction, which does not include traffic offenses. This policy definition is important to keep in mind when going over the data. Further, many of the individuals in the data have multiple convictions due to numerous and repeated criminal offenses.

"A review of internal ICE metrics for 2013 reveals that hundreds of thousands of deportable aliens who were identified in the interior of the country were released instead of removed under the administration’s sweeping “prosecutorial discretion” guidelines. In 2013, ICE reported 722,000 encounters with potentially deportable aliens, most of whom came to their attention after incarceration for a local arrest. Yet ICE officials followed through with immigration charges for only 195,000 of these aliens, only about one-fourth. According to ICE personnel, the vast majority of these releases occurred because of current policies that shield most illegal aliens from enforcement, not because the aliens turned out to have legal status or were qualified to stay in the United States," a summary of the report states. "Many of the aliens ignored by ICE were convicted criminals. In 2013, ICE agents released 68,000 aliens with criminal convictions, or 35 percent of all criminal aliens they reported encountering. The criminal alien releases typically occur without formal notice to local law enforcement agencies and victims."

More key findings from the report (bolding is mine):

-In 2013, ICE targeted only 195,000, or 25 percent, out of 722,000 potentially deportable aliens they encountered. Most of these aliens came to ICE’s attention after incarceration for a local arrest.
-ICE released 68,000 criminal aliens in 2013, or 35 percent of the criminal aliens encountered by officers. The vast majority of these releases occurred because of the Obama administration’s prosecutorial discretion policies, not because the aliens were not deportable.
-ICE targeted 28 percent fewer aliens for deportation from the interior in 2013 than in 2012, despite sustained high numbers of encounters in the Criminal Alien and Secure Communities programs.
- Every ICE field office but one reported a decline in interior enforcement activity, with the largest decline in the Atlanta field office, which covers Georgia and the Carolinas.
-ICE reports that there are more than 870,000 aliens on its docket who have been ordered removed, but who remain in defiance of the law.
-Under current policies, an alien’s family relationships, political considerations, attention from advocacy groups, and other factors not related to public safety can trump even serious criminal convictions and result in the termination of a deportation case.
- Less than 2 percent of ICE’s caseload was in detention at the end of fiscal year 2013.
-About three-fourths of the aliens ICE detained in 2013 had criminal and/or immigration convictions so serious that the detention was required by statute.

The report concludes by blowing the Obama administration's argument about mass deportation numbers out of the water.

"The recent campaign by advocacy groups to portray the president as a tough immigration enforcer at the helm of a system that is producing “record” deportations bears no resemblance to the reality of immigration enforcement today. Interior immigration has declined significantly and ICE is ignoring hundreds of thousands of illegal aliens, including tens of thousands with criminal convictions, who are encountered by ICE officers and agents," the report states.

For years Chris Crane, President of the ICE Council, has been sounding the alarm about the administration and Congress failing to handle criminal aliens properly when drafting new policy. Crane has also argued current policies tie the hands of ICE agents while emboldening criminal aliens working and living inside the United States.

Currently, the Obama administration is in the process of reviewing deportation practices in order to be "more humane" toward illegal immigrants. According to the data, they've been more than humane to the wrong people.

“The preponderance of the evidence demonstrates that immigration enforcement in America has collapsed. Even those with criminal convictions are being released. DHS is a department in crisis. Secretary Johnson must reject the President’s demands to weaken enforcement further and tell him that his duty, and his officers’ duty, is to enforce the law—not break it. As Homeland Secretary, Mr. Johnson is tasked with ensuring the public safety and the rule of law. But Secretary Johnson is not meeting these duties," Republican Senator Jeff Sessions said in response to the report. "American citizens have a legal and moral right to the protections our immigration laws afford—at the border, the interior and the workplace. The Administration has stripped these protections and adopted a government policy that encourages new arrivals to enter illegally or overstay visas by advertising immunity from future enforcement. Comments from top Administration officials, such as Attorney General Holder’s claim that amnesty is a civil right, or Vice President Biden’s claim that those here illegally are all U.S. citizens (apparently including someone whose visa expired yesterday), demonstrate the Administration’s increasing belief in an open borders policy the American public has always rejected. The Administration’s lawless policies have not only impaired public safety but increased economic suffering for millions of vulnerable Americans by depriving them of their jobs and wages. Unfortunately, Congressional Democrats continue to empower this lawlessness. Republicans must work to end it.”