Rep. Keith Ellison: I Wish Democrats Would Come Out Against the Second Amendment 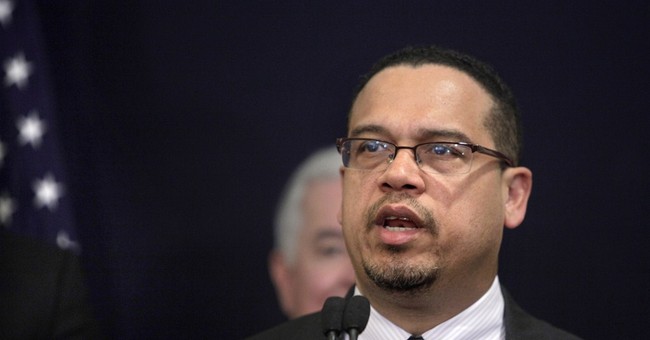 During an appearance over the weekend on HBO's Real Time with Bill Maher, Minnesota Rep. Keith Ellison said he wishes Democrats would come out in opposition to the Second Amendment. Before the admission, Ellison listed off a number of "common sense" ways we can reduce "gun violence," which is typical of anti-gun advocates. He also stated, "I don't think you have to got eliminate ownership of all guns in order to get some common sense gun rules," and made a cringe worthy comment about a 30-round "clip" when he should have said "magazine."

Maher responded and pointed out his solutions wouldn't get anywhere, called common sense gun safety bulls*it and asked why Democrats won't simply come out against the Second Amendment. Ellison responded by saying, "I wish they would," right after claiming we don't have to "eliminate ownership of all guns in order to get some common sense gun rules."

Here is the exchange starting around the three minute mark, courtesy of RCP:

MAHER: Why doesn't your party come out against the Second Amendment? It's the problem.

MAHER: Really? Because I never hear anybody in the Democratic party say that. But they say, 'I am also a strong supporter.'

ELLISON: You have got to check out the progressive caucus. We have come out very strong for common-sense gun safety rules.

Notice again how Ellison goes from promoting "common sense" to wanting Democrats to come out against the Second Amendment and then back to "very strong common-sense gun safety rules." Progressives promote these ideas through deceit and by using words that sound good instead of being honest about their true intentions: an all out assault on the Second Amendment as Ellison revealed. Think progressive gun control starts and ends at "common-sense"? Think again.