Russia Tells Ukraine: Give Up Your Military Forces or Face Force 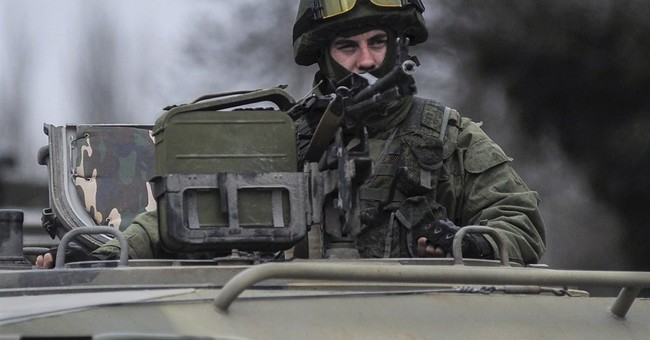 As President Obama and Secretary of State John Kerry continue to drown in their own foreign policy failures, Russia is demanding Ukrainian troops in Crimea surrender or face a military storm. More from the BBC:

The Russian military has given Ukrainian forces in Crimea until 03:00 GMT to surrender or face an assault, Ukrainian defence sources have said.

The head of Russia's Black Sea Fleet Aleksander Vitko set the deadline and threatened an attack "across Crimea".

Western powers have condemned Moscow's decision to send troops as a "violation of Ukraine's sovereignty".

And from Sky News:

“If they do not surrender before 5am tomorrow, a real assault will be started against units and divisions of the armed forces across Crimea," Russia’s Black Sea Fleet Commander Alexander Vitko told the Interfax news agency Monday, Sky News reports.

The question now becomes: Does this cross the "line" the White House referred to last week?

The Obama administration on Friday told Russia not to cross a “line” in Ukraine, though officials wouldn’t speculate about what the U.S. will do if Moscow disregards the warning about its politically chaotic neighbor.

“We are watching to see … whether or not Russia is doing anything that might be crossing the line in any way,” White House press secretary Jay Carney told reporters Friday.


Vice President Joe Biden reportedly had a phone conversation this morning with Russian Prime Minister Dmitry Medvedev about the ongoing stand-off. No word of flexibility.

Meanwhile here's some more great news, China is backing Russia on its invasion of Ukraine.

China has backed Russia in a tense standoff with the US and Europe that has erupted following the pro-West revolution in Ukraine.

Russian Foreign Minister Sergei Lavrov discussed the unfolding crisis in its southern neighbour in a phone conversation with his Chinese counterpart, Wang Yi.

"The foreign ministers of both countries exchanged views on the situation in Ukraine. They noted the coincidence of positions on this aspect," a spokesperson for the Russian ministry said, Itar-Tass news agency reported.


Earlier today on Fox News, General Jack Keane and KT McFarland analyzed the situation, calling it a "test of wills."According to the Ukrainian Ambassador to the UN, Ukraine is preparing for war.