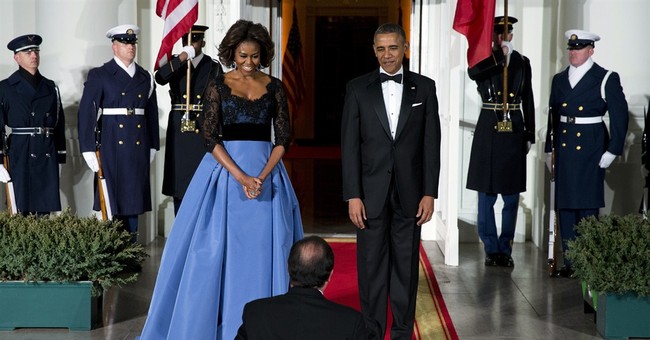 Earlier this week President Obama and the First Lady hosted French President Francois Hollande at the White House for an official state dinner. It was quite the affair with caviar, quail eggs, rib-eye and chocolate-malted ganache.

In case you don't remember, Hollande is a full blown French socialist who deeply believes the only way to help the poor is by demonizing and soaking the rich. Hollande is currently moving forward with his plan in France to tax millionaires 75 percent after receiving approval from a court. President Obama holds similar views and has repeatedly told the rich they need to "pay their fair share" so that the rest of us can have a fair shot at life.

But it's difficult to take these positions seriously when the people taking them engage in the very lifestyles they claim to abhor. Take for example Michelle Obama, who wore a $12,000 Carolina Herrera designer gown to the state dinner earlier this week. Just a few weeks before the dinner, President Obama argued income inequality is a major problem facing our America. CNSNews noticed the cost of her dress is more than the average household income worldwide.

The blue and black designer dress that first lady Michelle Obama wore to Tuesday’s state dinner for the French president reportedly cost between $10,000 and $12,000, according to news media, which is more than the median annual household income worldwide of $9,733, and greater than the median income for households in at least 87 countries, according to data from Gallup.

Just before the dinner, Michelle Obama tweeted out this photo of her dogs at the dinner table dining on crystal and fancy china.

When Michelle Obama walked out to greet the French President, the media swooned. NBC's Shawna Thomas declared "BOW DOWN!" on Twitter when she saw the dress.


NBC is the same network that questioned Ann Romney for wearing a $900 designer shirt for an interview with CBS This Morning. The Romneys have donated more than $20 million to charity over their lifetimes and have worked for the majority of their lives in the private sector. The same cannot be said for the Obamas.

Here's my bottom line, I couldn't care less how much Michelle Obama's gown cost. I'd love for every woman to have the opportunity to wear a gown like that in her life. Designer clothes are expensive because of the work that goes into them and I'm happy Caroline Herrera got paid for the work she did. Herrera reaped the reward of having a First Lady wear her art and product thanks to hard work. The issue is the Obamas and President Hollande lecturing the rest of us about how much money we should make, how we spend our money and how much of our money they are entitled to. People like Hollande and the Obamas are either elitist hypocrites or they don't really believe in the socialist policies they preach about and implement for the rest of us.