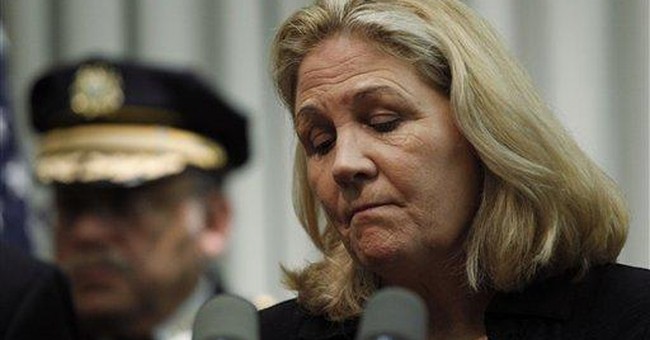 Last month Maureen Faulker, the widow of murdered Philadelphia Police Officer Daniel Faulkner, requested a chance to give testimony against President Obama's nominee to head the Department of Justice Civil Rights Division. Her husband was killed in 1981 by former Black Panther Mumia Abu-Jamal, who was convicted of murder in 1982. Thirty years after the conviction, nominee Debo Adegbile voluntarily took up Abu-Jamal's case and the cause in the name of race during his time as the head of NAACP Legal Defense Fund. Republican Senator Chuck Grassley asked for Faulkner's request to present testimony be granted, but Democrats have blocked her from doing so. The Senate Judiciary Committee will vote today on Adegbile's nomination. More from Fox News:

"I am physically, emotionally and mentally distressed that I'm not able to be in that room," Faulkner told FoxNews.com by phone. "This is personal to me."

Faulkner said she received a letter from Leahy's office this week informing her that it's "not the practice" of the committee to accept outside testimony. Faulkner, who lives in Los Angeles, later realized she could attend the hearing as a member of the public but was unable to book a flight.

"I couldn't sleep all night," she said. "If I found out about this before yesterday and I could physically be there, I would be there."

A Leahy spokeswoman told FoxNews.com that a hearing to consider Adegbile's nomination was already held on Jan. 8, and lawmakers were allowed to ask questions on his background then. She reiterated that "it's not the practice" of the committee to have outside witnesses.

Faulkner isn't alone in her opposition to Adegbile. The National Fraternal Order of Police sent President Obama a scathing letter condemning his nomination, saying it was a "slap in the face to all law enforcement officers."


While I would have preferred to do so personally, I’m writing this letter appealing to your sense of right and wrong, good and evil as you consider the nomination of Debo Adegbile to be the next head of the Civil Rights Division of the Department of Justice. Thirty three years ago my husband, Philadelphia Police Officer Daniel Faulkner, was violently murdered by a self-professed “revolutionary” named Mumia Abu- Jamal. I was twenty four years old. While most of my friends spent their summer at the Jersey Shore, I sat in a hot steamy courtroom and watched in horror and disbelief as the man who murdered my husband tried to turn the courtroom into a political stage where he could spew his hatred and contempt for this country and our judicial system. At the moment my husband’s blood stained shirt was displayed by the evidence handler, Mumia Abu-Jamal turned in his chair and smirked at me; demonstrating his contempt for law enforcement.


Thankfully, a racially mixed jury that was selected by Abu-Jamal while representing himself, found him guilty. The following day they sentenced him to death for the brutal act he committed. That’s when my second nightmare began. For three decades my family and I endured appeal after appeal – each rooted in lies, distortions and allegations of civil rights violations. And year after year, judge after judge, the conviction and sentence were unanimously upheld. Then, thirty years after the fact, my family, society and I were denied justice when three Federal District Court judges who have found error in every capital case that has come before them, overturned the death sentence. Today, as my husband lies thirty three years in the grave, his killer has become a wealthy celebrity. He pens books and social commentaries critical of our country. He regularly uses his nearly unlimited access to the prison telephone to do radio programs, has cable TV in his cell and is permitted to hold his wife, children and grandchildren in his arms when they visit.


Old wounds have once again been ripped open and additional insult is brought upon our law enforcement community in this country by President Obama’s nomination of Debo Adegbile. While publically demonstrating that he doesn’t even know my husband’s name, Mr. Adegbile fains sympathy and caring for my family and me. In reality, Mr. Adegbile was a willing and enthusiastic accomplice in Mumia Abu-Jamal’s bid to cheat us of the justice we waited so many years for. Mr. Adegbile freely chose to throw the weight of his organization behind Mumia Abu-Jamal, and he has publically stated that he would get Mumia Abu-Jamal off death row. Mr. Adegbile holds Mumia Abu-Jamal, a remorseless unrepentant cop killer, in high esteem. We know this because attorneys working under Mr. Adgebile’s supervision have stood before public rallies held in support of my husband’s killer and openly professed that it was “an extreme honor” to represent the man who put a hollow based bullet into my husband’s brain as he lay on the ground, wounded, unarmed and defenseless. And while Mr. Adegbile and those who support his nomination will undoubtedly argue that he did not personally make such statements, he did nothing to counter or stop them.


In the end, like so many attorneys before him, Mr. Adegbile’s allegations of civil right abuse rang hollow. Mumia Abu-Jamal’s death sentence was overturned not because of civil rights abuse as alleged by Mr. Adegbile, but because three judges with a persona dislike for capital punishment conveniently determined that the wording in a standard form given to the jury might have confused them. While Debo Adegbile may be a well-qualified and competent litigator, through his words, his decisions and his actions he has clearly and repeatedly demonstrated that he is not the best person to fill this important position. Certainly there are others with similar qualifications that would be better choices. I would argue that Mr. Adegbile’s decision to defend a cop killer should preclude him from holding any public position.


Your decision means a lot to me personally. The thought that Mr. Adegbile would be rewarded, in part, for the work he did for my husband’s killer is revolting. Throughout my long ordeal I have frequently been labeled a racist by many who support my husband’s killer simply because he is black and I white. I have also been asked to throw my name, my voice and my support behind political candidates from both parties. In each case I have declined. I have always believed that my husband’s death and my quest for justice transcends politics and race. From my heart, I’m asking you to do the same thing. Set aside any partisan feelings you have and do the right thing today when you vote on Mr Adegbile’s confirmation. Please spare my family and me from further pain.