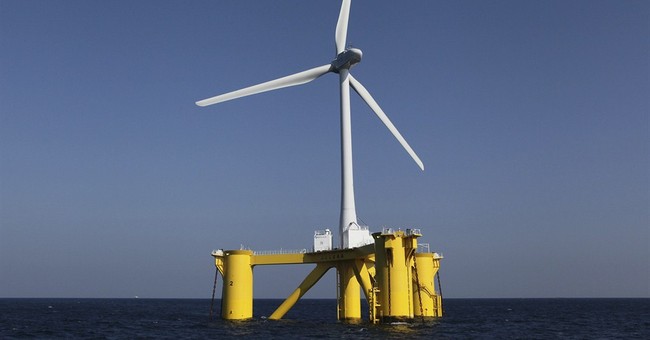 In the process of creating sustainable energy, wind turbines across the United States are also taking a toll on a species that is vital to our ecosystem: bats.

More than 600,000 bats fell victim to the turbines in 2012, according to a new study. The turbines spin at up to 179 miles per hour, rising hundreds of feet into the air.

While many Americans consider bats to be pesky or scary, they serve a vital ecological role. They eat a tremendous number of flying insects and they help pollinate crops, such as peaches and avocados.

Published in the journal BioScience, this University of Colorado study analyzes records of dead bats found near the wind generators.

"Dead bats are being found underneath wind turbines across North America," wrote biologist Mark Hayes. "This estimate of bat fatalities is probably conservative."

Think it doesn't matter? Think again. Bats eat insects that carry diseases. Malaria is on the rise (and killing more humans) for two reasons and you can thank radical environmentalists for both. The first reason is outlined above. Bats eat mosquitoes, which carry Malaria. The second is the ban of DDT, thanks to environmental elites living in urban high rise apartments. A flashback to 2001:

As First-World children eagerly anticipate the holiday season, millions of Third-World children are about to be condemned to certain death from malaria by international environmental elitists.

The World Wildlife Fund (WWF), Greenpeace, Physicians for Social Responsibility and 250 other environmental groups will advocate the insecticide DDT be banned at next week's United Nations Environment Program meeting in Johannesburg. The meeting's aim is a treaty banning or restricting so-called persistent organic chemicals.

Malaria control experts oppose a DDT ban, arguing that spraying DDT in houses is inexpensive and highly effective in controlling malaria — especially in sub-Saharan Africa where 1 in 20 children die from malaria. Unfortunately, the eco-elites have out-maneuvered and outgunned public health advocates.

"DDT is a persistent, bioaccumulative, hormone-disrupting chemical," alleges the director of the WWF's anti-DDT effort. "It is associated in the public's mind with weakened eggshells and declining bird populations...," he added.

But there never was, and still isn't a scientific basis for DDT fearmongering.

Wind turbines are an inefficient source of energy, don't reduce carbon output, cost taxpayers billions of dollars each year, require massive mining of rare earth materials in China and they're disrupting our ecosystem by killing the same species environmentalists claim they want to protect...like bats and endangered birds by the thousands...per day.

You've all seen it: the media sensationalizing footage of birds covered in oil after a spill, but what you haven't heard about are the thousands of birds killed every day by windmills in California, until now. And the birds being killed aren't just any birds, they are protected species.

Heckuva job! The worst part? The feds let them get away with it.