Democrat Who Said IRS Scandal Was Solved Backtracks: It's Not Solved 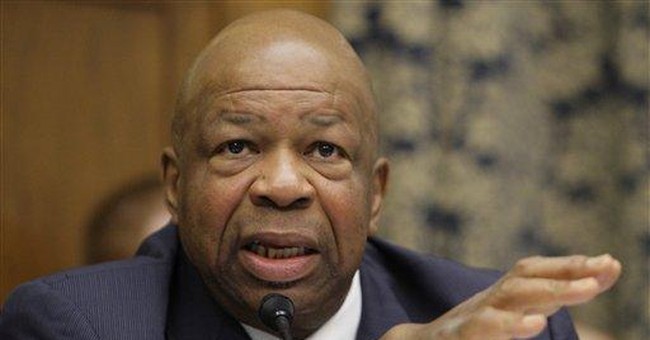 Last weekend, top Democrat and Ranking Member of the House Judiciary Committee Elijah Cummings, said the IRS scandal was "solved" and that we need to move along. Cummings cited an anonymous "conservative Republican" working in the IRS who supposedly came forward to say the White House wasn't involved in the targeting of conservative tea party groups.

Cummings then detailed an unreleased interview last week with an anonymous IRS manager who labeled himself a “conservative Republican.” The manager essentially said it was he who started the targeting of the groups and — contrary to GOP allegations — said that the White House wasn’t involved and that it wasn’t politically motivated.

“I think this interview and these statements go a long way … showing that the White House was not involved in this,” Cummings said on CNN’s “State of the Union,” adding: “Based upon everything I’ve seen the case is solved. And if it were me, I would wrap this case up and move on, to be frank with you.”

Now, Cummings is "clarifying" his remarks and has admitted that the issue in fact isn't solved while accusing Republicans who want answers of a "witch hunt."

Rep. Elijah Cummings is backing away from his assertion that the investigation into the IRS scandal is “solved” and says he still wants to work with Republicans on the probe.

In a brief interview with POLITICO on Wednesday, Cummings said that he was trying to argue that — contrary to some GOP comments — the investigation has proven the Obama administration didn’t order the IRS to target conservative groups applying for a tax exemption.

“The witch hunt needs to end,” said Cummings, who is the top Democrat on the House Oversight and Government Reform Committee. “What I meant was the witch hunt.”

Cummings said the investigation isn’t over and he’s open to interviewing additional Cincinnati-based IRS employees and holding more hearings on the scandal.

As a reminder, Democrats in the House have repeatedly accused Republicans of a so-called witch hunt for demanding answers on previous scandals like Operation Fast and Furious and Benghazi in order to protect the White House.

The investigation into how and why the IRS targeted Americans for their political beliefs is far from over. Reps. Jim Jordan and Mike Turner explained where the investigation stands earlier this week on Hannity.