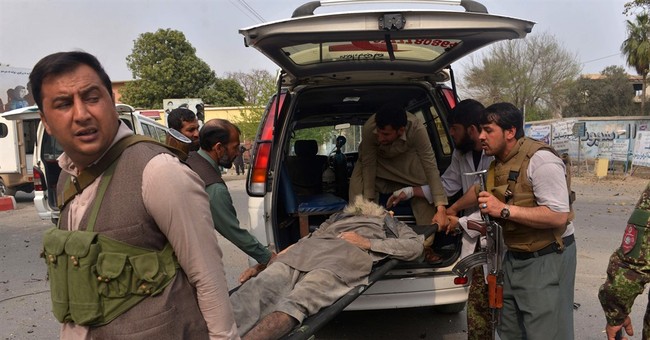 Taliban groups in Afghanistan have announced their annual warm-weather fighting season has begun and promises more "large-scale attacks" in their 15th year combating the United States, according to the Associated Press.

The Islamic group claims to have begun their spring offensive at 5 a.m Tuesday morning and call it "Operation Omari" in honor of Taliban founder Mullah Mohammad Omar, who died three years ago.  While there was no sudden surge in violence, officials said at least five members of Afghanistan's border police had been killed overnight when one police officer turned his weapon on his colleagues.  This comes to no surprise as it was only yesterday that we heard of several U.S.-trained Afghan soldiers defecting and joining the ranks of the Taliban to supply knowledge and supplies.

In an email notifying local press, the statement says waging jihad against American invaders is a holy obligation.

They assured the local governments that areas under their control would remain civilized. "Mechanisms for good governance will be established so that our people can live a life of security and normalcy," the group said.

They also said they would try to avoid killing civilians or destroying civilian infrastructure, and would carry out a "dialogue with our countrymen in the enemy ranks" to try to convince them to join the insurgency. This option will probably be considered by ISIS members who have invaded the country and want a less extreme Islamic group to join.

Ali Shah Khan, an elder in Sangin district, said Kabul has been warned for weeks of the Taliban threat "so many times but no one listened and that is why the Taliban have gained control of more than half of the province."

"Without good leadership and coordination between the security forces, they just let the Taliban gain control over more territory," he said.

Several trillion dollars, thousands of American lives, and 15 years of political nightmare leads any sensible person to question what our plan is in the Middle East.