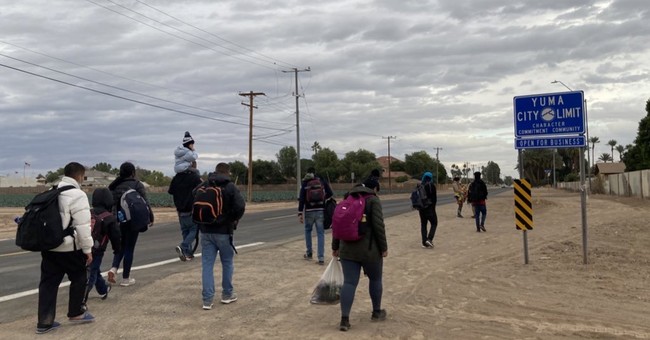 The COVID-19 pandemic health enforcement used by Border Patrol, Title 42, is slated to be lifted on May 23, but the law enforcement agency has already been told to not process illegal immigrants from the Northern Triangle countries under Title 42, adding to the growing list of nationalities where the public health order no long applies.

Title 42 applied to all people who illegally crossed the U.S. border under former President Donald Trump, but under President Joe Biden, it has been applied to fewer and fewer groups and nationalities. Fox News National Correspondent Bill Melugin tweeted on Wednesday Brandon Judd, the president of the Border Patrol union, revealed the latest carve out from the Biden administration.

Agents in the field have been telling me the same, they’ve been told to no longer enforce Title 42 on Northern Triangle countries even though the May 23rd repeal date is still over a month away. I’m told only predominantly Mexican nationals are being Title 42’d now. @FoxNews

We tweeted this info yesterday. Biden doing all he can to remove barriers to illegal immigration. You have to ask why we even have a legal immigration system at this point. It's been dismantled by Biden & ignored by millions who commit a crime, crash border & then many rewarded. https://t.co/2TNhvJ50eo

I can confirm from my recent time down in the Rio Grande Valley, not only are people from Northern Triangle countries not being sent back to Mexico under Title 42, but also many single adults from countries such as Colombia, Cuba, Nicaragua, and Venezuela. A local church in Brownsville, Texas told Townhall they used to take care of 1,000 people per week, now they get 900 people a day. There is concern among law enforcement and charities they will be severely overwhelmed once Title 42 is officially lifted.