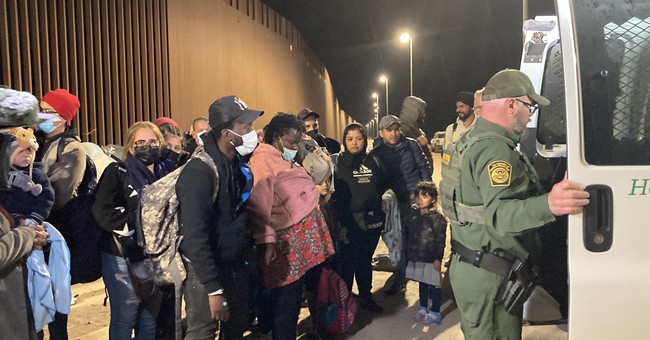 Preliminary U.S. Customs and Border Protection (CBP) data obtained by the Washington Post shows November was another busy month of Border Patrol as the large wave of people attempting to illegally enter the U.S. via the southern border continues unabated.

Approximately half of those arrested were expelled to their native countries or to Mexico under Title 42, which was started during the Trump administration during the early days of the COVID-19 pandemic. Title 42 largely does not apply to unaccompanied minors and family units who willingly give themselves over to Border Patrol, as November's data shows they were allowed into the United States.

Two-thirds of the 114,100 adults traveling by themselves were expelled under Title 42.

The town of Yuma, Arizona has become another hotspot along the U.S.-Mexico border as Texas, long battered by the crisis, continues to use Texas State troopers and National Guardsmen to bolster overwhelmed Border Patrol agents. The apprehension numbers do not include the number of "gotaways," those who are known to have entered the U.S. but not encountered by Border Patrol.

New CBP data on "gotaways" obtained by Townhall show a dramatic increase in "gotaways" nationwide shortly after Joe Biden became president, jumping to 23,899 in February from 9,476 in January. Even with the estimation from CBP, former and current border personnel admit those numbers are vastly undercounted.

The effects of the Biden administration being forced to implement the Migrant Protection Protocols this month by a federal court remain to be seen as not every border town in Mexico is accepting migrants taken in by CBP.