Rep. Waters Thinks She Knows Why Border Patrol Tried to Protect the Border from Haitians 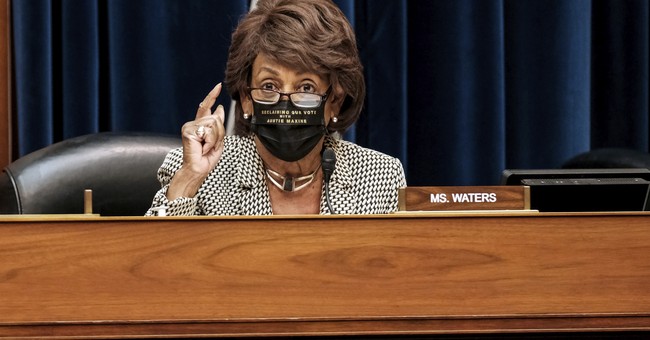 Congresswoman Maxine Waters (D-CA) continued to accuse the Border Patrol agents on horseback, who were filmed and photographed attempting to stop Haitians from illegally entering the United States, of being racist because of the Haitians' skin color.

The images were used to falsely accuse the agents of using "whips" to hit the illegal immigrants when instead, the agents were spinning the reins to prevent people from getting too close to the horses. Despite the truth coming out, the outrage over the false narrative spread all the way to the White House.

President Joe Biden said an investigation would be conducted, adding the agents involved would "pay."

"Well, let me just say that those images were shocking and for those of us who have been fighting for so many years for justice and freedom for all and dealing with what can be done to make up for the past, all of that, it just absolutely shocked us," Rep. Waters said.

Waters pointed to how differently Afghans have been treated by the U.S. government compared to how some Haitians have been deported back to Haiti, despite the fact that a vast majority of those who recently crossed into the U.S. have been released from custody and are now in the country.

When Waters referred to the video of the now-famous incident in Del Rio, MSNBC Alex Witt said, "Yeah. It was horrific to look at, and I frankly don't want to see those videos again played on our broadcast during this interview."

"Haitians have been the victims because they were the first country to fight off, you know, the repression of France. And of course, France has made them pay a big price for it," Waters said. "Yes, I think they're treated differently because they're black, because they're Haitians, and because traditionally, they have not been treated as human beings."

"The controversy over mounted agents at the border is a shameless and manufactured attempt to change the subject away from the Biden administration’s disastrous immigration policies. To accuse the agents of racist conduct based on still images that even the photographer says are being misconstrued is a grotesque slander against people who have dedicated their lives to protect our borders, our laws and our citizens," said Dale L. Wilcox, executive director and general counsel, Immigration Reform Law Institute.