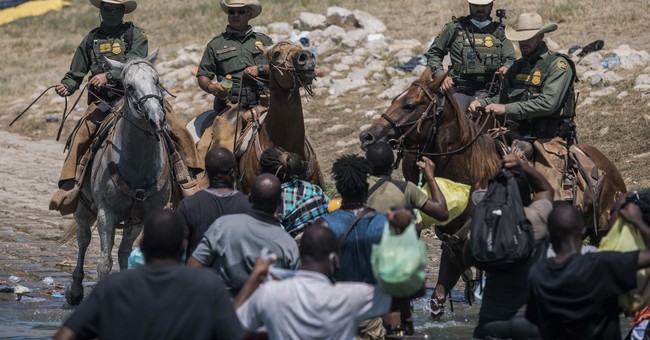 The photographer who took pictures of Border Patrol agents on horseback attempting to prevent Haitians from illegally crossing into the United States is speaking out after Democrats and the mainstream media falsely accused the agents of using whips on the Haitians by using his photos.

Speaking with KTSM, Paul Ratje said he and his colleagues never saw agents whipping anyone.

"I’ve never seen them whip anyone. He was swinging it, but it can be misconstrued when you’re looking at the picture," Ratje said.

Ratje's eyewitness account dismantles the prevailing narrative conjured up by Democrats and the mainstream media, who have accused the agents of using equipment they are not issued and of being racist.

The agents in question are under investigation by the Department of Homeland Security and the entire unit has been ordered to stop operations in the Del Rio Sector.

A source within Border Patrol previously explained to Townhall what people got wrong about the incident:

"Agents use their reins for a lot of reasons. Primarily it's used to steer the horse, but agents will also spin them sometimes to deter people from getting too close to the horse. If they get too close, the horse can step on them, breaking bones or causing other injuries. Agents also need to maintain control of their reins so they don't lose control of the horse, which can cause injuries to immigrants, the agents, and the horses.
"We are not aware of anyone being struck with the reins."

During his press conference on Friday, President Joe Biden said the agents involved in the incident "will pay" for something we have long known did not happen.

Biden on the lie that border patrol were using whips on illegal immigrants at the border:

"To see people treated like they did? Horses running them over? People being strapped? It's outrageous. I promise you, those people will pay." pic.twitter.com/Jx79KoYTy9

With the horse unit now not doing patrols at the moment, Jon Anfinsen, president of the Border Patrol's Local 2366 in Del Rio, said the already open border is now less secure:

"The horse patrol unit is an effective means of apprehending immigrants who illegally cross our borders every day, along with searching for those who are sick or injured and stranded in the brush.

"Suspending them all for even a brief amount of time takes away one of the few remaining units that have been in the field making arrests and rescues on a regular basis. When the rest of our agents are indoors processing, unable to make arrests and rescues of their own, we should be using all the resources we have to patrol the border."

In response to Biden's threat, Anfinsen said, "How can President Biden continue with this false narrative when the photographer who took the photos of the horse patrol unit has already said nobody was whipped? What happened to due process?"