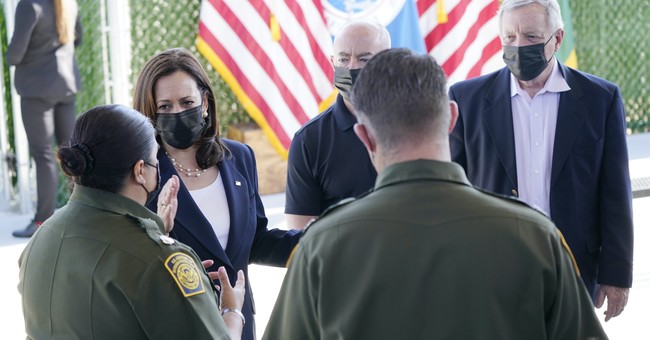 Vice President Kamala Harris finally made her way down to a U.S. border town on Friday, deciding to visit El Paso, Texas for a couple of hours before making her way to Los Angeles, California.

While El Paso, and its Congressional district, are heavily Democratic, it appears mostly supporters of former President Donald Trump showed up to "greet" Harris when she arrived at the El Paso Border Patrol Station. Photos and videos of the gathering showed Trump supporters, most of whom were Latino, carrying Trump flags and anti-Harris signs.

"How many little girls need to be raped for this to be a crisis?" a banner read.

VP Harris has arrived. Not the welcome I think she was expecting. “Que-Mala! we don’t want you here!” were some of the chants by this Hispanic/Latino organized group. pic.twitter.com/ZbG8UFozj7

The scene is similar to when protesters in Guatemala City voiced their opposition to Harris when she visited during her trip to the North Triangle country and Mexico.

As Guatemala's president blamed Biden for the border crisis, VP Kamala Harris was welcomed to the country by protestors with huge signs displaying messages such as "Trump won" and "Mind your own business." pic.twitter.com/BCdLdWvmQc

Harris told reporters when she landed in El Paso that it was always the plan to visit a border town, despite her trip being announced after Trump said he was going to visit the U.S.-Mexico border in Texas.