'I Am Nonviolent': Maxine Waters Defends Her Call for Protesters to Get 'More Confrontational' 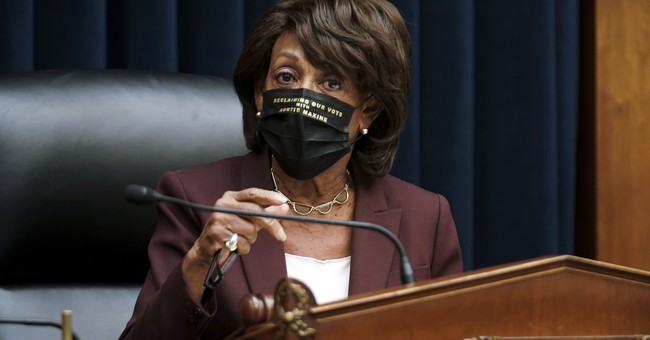 Rep. Maxine Waters (D-CA) defended her calls for people in the Minneapolis area to be "more confrontational" in the event the Derek Chauvin trial did not result in a guilty verdict with an op-ed for the Los Angeles Times that was published on Thursday.

Right before the verdict was set to be announced, Waters traveled to Brooklyn Center, which had experienced days of protests and riots after the accidental police killing of Daunte Wright, when she was asked what people should do if Chauvin walked free or was only convicted of manslaughter.

"I am nonviolent," Waters wrote.

"Now, because of who I am, the right-wing and members of Congress who subscribe to the views of groups like QAnon, the Oath Keepers, the Proud Boys and the KKK have targeted me. Those very people have done so to divert attention from the fact that they aided and abetted a violent, domestic terrorist insurrection led by Donald Trump," she continued. "To target me and say that I was violent or encouraging violence is a blatant distortion of the truth."

"Anybody who knows me or has seen the way I stand up for my community knows that I am nonviolent. In the same way that Martin Luther King Jr. created Project C — Project Confrontation — during the civil rights movement to further our march toward freedom, I am an advocate for peace and fairness and justice. Project Confrontation was not about violence, but about confronting the injustices in our society by letting our voice be heard and our presence be felt," she added, noting she is "hopeful that the police killings of Black people can be stopped."

If Republicans Collaborate with Dems to Betray Us on the 2A, They Will Lose the Midterms
Townhall
Andy Ngô exposes SICKO claiming to be the uncle of a slain Uvalde student accusing Gov. Abbott of horrible things (SOOO many idiot blue-checks who fell for it)
Twitchy
Judge Just Threw Another Roadblock Into Durham's Case Against Sussmann
Redstate
Why the Heck Did Amber Heard's Legal Team Call Her Back to the Stand?
PJ Media