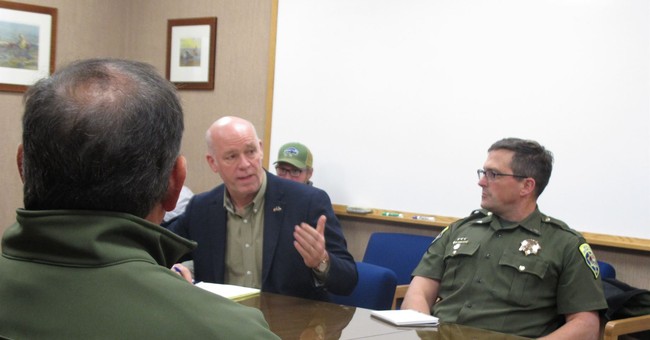 Montana Gov. Greg Gianforte (R) criticized President Joe Biden's relaxed approach to immigration because his open border policies are not just affecting the towns along the southwest border, but even states on the opposite side of the country.

"Fox & Friends" host Steve Doocy asked Gianforte for his reaction regarding the news of asylum-seekers testing positive for COVID-19 and still getting on buses to go further into the country after they were processed by Border Patrol.

"Well, it’s not just the immigration, Steve. In Montana, we are concerned about meth coming across the border. It’s ripping our families and communities apart. And opening these borders back up, it’s just not good for our communities here in Montana," Gianforte noted.

With regards to COVID-19, Gianforte noted when he came into office in January, "We immediately got rid of the business restrictions, hours of operation, capacity limits, we’ve lifted the mask mandate. And I think the biggest decision that we’ve made was to simplify our vaccine distribution to prioritize the most vulnerable, and we’ve gotten great results."

The "every county is a border county" mindset is not lost on other Republicans.

"Every town in the nation has the potential to become a border town and that's because the problems we are talking about, with human trafficking, with sex trafficking, with drug trafficking, that spreads out," Rep. Matt Rosendale (R-MT) previously told Townhall.

The ongoing crisis at the southwest border, which the Biden administration refers to as a "challenge," is just getting started. Border Patrol has seen a surge of unaccompanied minors, which is already starting to overwhelm their holding facilities.