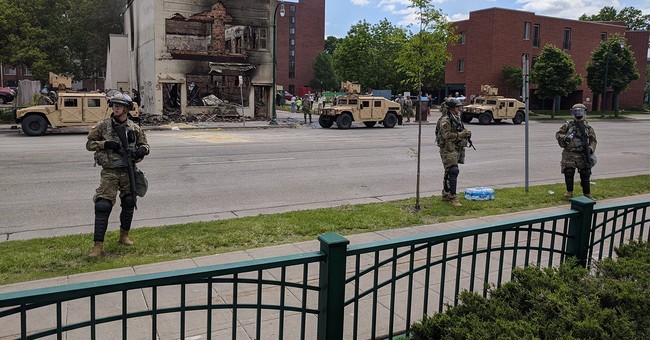 Sheila Nezhad, a "community organizer, queer woman, [and] candidate for mayor of Minneapolis," wrote in an op-ed for the Star Tribune arguing the city does not need the National Guardsmen in the area while the trial of former police officer Derek Chauvin is ongoing, which is scheduled to start March 8.

The National Guard deployment, which is part of Operation Safety Net, is the state and city's response to not have a repeat of the riots that plagued the city, and eventually major cities across the U.S., after video showing Chauvin kneeling on George Floyd's neck, who later died, was posted to social media in late May 2020.

[The National Guard's] presence last year only led to more violence and gave little benefit to the city," Nezhad wrote.

"When the Guard was deployed last May, those of us who live and work in Minneapolis received little benefit, but great harm came to our city. We experienced residents shot by rubber bullets and marking rounds while simply standing on their own front porches. We saw the Guard slashing tires of legally parked automobiles for no lawful purpose. We saw the arrest of law-abiding residents and targeting of reporters — over which there's now a lawsuit. The tank-like vehicles, troop carriers, Humvees and SUVs road up and down our streets supposedly to discourage agitators, but rather instilled fear in community members.

"When the National Guard was deployed last May, there was no evidence that the troops actually helped our residents. We saw a rounding up of peaceful protesters who had, just minutes prior, survived a semi-truck barreling through their demonstration. It's important to point out that this truck was not stopped by the National Guard and State Patrol, and easily could have been thus allowed to threaten residents as a 50 ton battering ram."

She then lays blame on the National Guard for not preventing the fires that were set by rioters and torched hundreds of small businesses.

"The post office, the Wells Fargo Bank, Migizi Communications, and hundreds of additional small businesses and business centers were burned while the National Guard was deployed," she wrote, adding it was "community members, not the National Guard, who were on the front lines."

"We need healing, not fear. An armed military occupation of our city while we await Chauvin's fate is not the answer," Nezhad closed.

Riots occurred in Minneapolis, and later in St. Paul, on May 26, 27, 28, 29, and 30, resulting in millions of dollars in damage and multiple injuries and deaths. Order to the city appeared to have mostly been restored by May 31 after a large deployment of the National Guard and police from outside the metropolitan area.