The Daily Wire's 'Run Hide Fight' is a Must-See 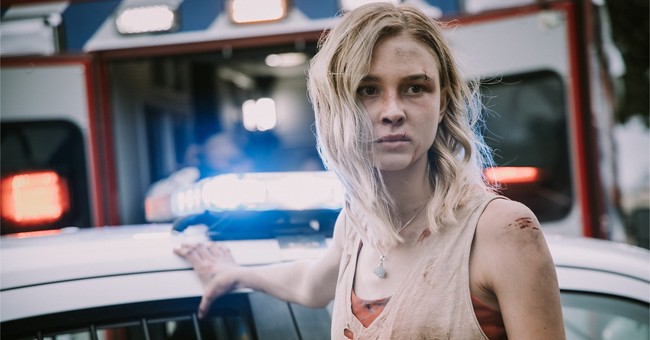 I'll start this review off by stating I'm not a "professional" movie critic as I am a simple man when it comes to what I enjoy while watching a movie. Watching the trailer for "Run Hide Fight" certainly piqued my interest as it looked like a movie with a good plot and acting.

In short, I liked the movie a great deal. The lead actress, Isabel May, kills it, in more ways than one, as the disinterested soon-to-be high school graduate Zoey Hull who uses grit and determination to save as many of her fellow students as possible when it comes under attack by a small group of school rejects trying to take revenge in a well-thought-out plan.

Without going into spoilers, when the plot starts moving I was at first in disbelief at how the school shooters were able to carry their plan, but as the movie goes on, I realized that it was very much believable. Like all works of fiction, it does require to suspend belief, but not much is required for this movie.

I also was a fan of the main character's father Todd Hull, played by Thomas Jane. Jane's recent projects include Amazon Prime's "The Expanse," which is currently one of my favorite shows. Jane's character served in the military, which adds a little bit of that extra flavor to the plot.

Overall, I don't have any serious critiques. It's raw, doesn't leave Zoey unscathed when she battles her way to stop the school shooters, and while the ending is somewhat predictable, I have no issue with that.

What is interesting to see is how liberal-soaked media reacted to the movie, since it was distributed by Ben Shapiro's The Daily Wire. I don't take much stock in what movie critics say about movies, but what I find interesting is the gap shown on Rotten Tomatoes. On the "Tomatometer," set by professional critics, the movie's rating is at 25 percent, but the audience score has it at 93 percent. Safe to say I agree with the latter.

Image 1: The Daily Beast before they knew they were reviewing a movie from The Daily Wire

Image 2: The Daily Beast after they knew they were reviewing a movie from The Daily Wire pic.twitter.com/aMYBl2tB6w

"Run Hide Fight" is out now and available for subscribers on Daily Wire's platform.