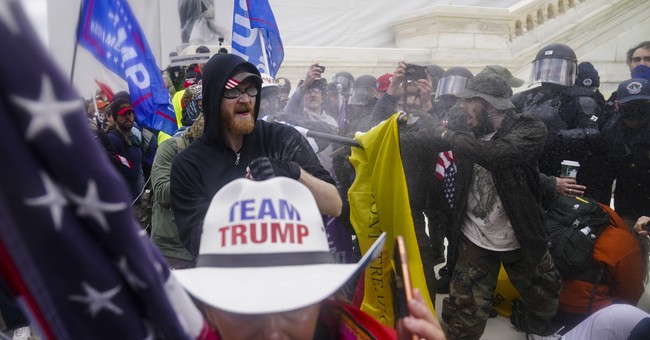 WASHINGTON, D.C. — The pro-Trump rally near the White House on Wednesday turned into a riot on the steps and inside the halls of the Capitol building.

I made my way over to the Capitol building, the site of many protests, in the afternoon after I was told large numbers of people were starting to go there since members of Congress were getting ready to certify President-elect Joe Biden as the winner of the November election.

Wanting to save time and my legs, I took the Metro to the Capitol South station. I walked toward the west side, which faces the Lincoln Memorial, and could hear screaming and metal banging. I saw people tearing away the construction fencing that is only meant to section off areas ahead of the inauguration. Trump supporters easily overwhelmed the small number of Capitol Police officers, who were not in riot gear, and go onto the steps of the Capitol. People then made their way up the scaffolding with officers chasing close behind.

Thousands of people were now at the Capitol building, and officers could not hold back the rioters who were fighting back attempts to push them away. Projectiles were thrown at officers, mace and bear spray were heavily used from both sides. Officers on the upper balcony were shooting pepper balls at the crowd. I was hit in the hand and upper bicep with pepper balls.

Eventually, the officers fell back because they did not have the numbers needed to hold the defensive line they had established. Rioters breached the complex in multiple entrances and exits. I followed a crowd that was making its way over to the east side of the building. A mass of people was on the main steps that lead toward the Rotunda and was trying to squeeze into the narrow doorways.

I was able to make my way inside the Rotunda. People were milling about at first, but the chaos started once again when Capitol police and D.C. Metro officers started to push everyone out through the one exit. This created a very dangerous situation. Everyone was packed really tight against each other with nowhere to go because people outside the building were still trying to push their way in. People were falling on top of each other, and those unlucky enough were starting to be trampled on. It was getting impossible to breathe to the point where I thought I was going to die from suffocation right inside the Rotunda. I knew that if I fell down, I was not going to get back up.

I was able to inch my way toward the doorway. I locked eyes with a man and screamed, "PULL ME OUT!" He grabbed my ballistic vest and yanked me out.

Once outside, I collected myself and continued to film law enforcement's efforts to secure the Capitol building. More CS gas and pepper spray were used. The situation became hairy for members of the media as a mob ran off reporters and destroyed camera equipment.

Things mostly calmed down on the east side once the 6:00 p.m. curfew drew closer. The police now outnumbered the Trump supporters who stayed behind. I left Washington, D.C., via the Metro to appear on Fox News hosts Tucker Carlson's and Shannon Bream's shows.

In a lot of ways, it was just a surreal moment in my career of covering protests and riots. While it was contained to the Capitol Hill area, almost nothing can top the significance of rioters breaching the building that houses one of the United States' central pillars of government.

In addition to many officers being injured, Capitol Police Officer Brian D. Sicknick died from the injuries he sustained after defending the Capitol while Ashli Babbitt, an Air Force veteran, was shot and killed by police after trying to enter the Speaker's Lobby.