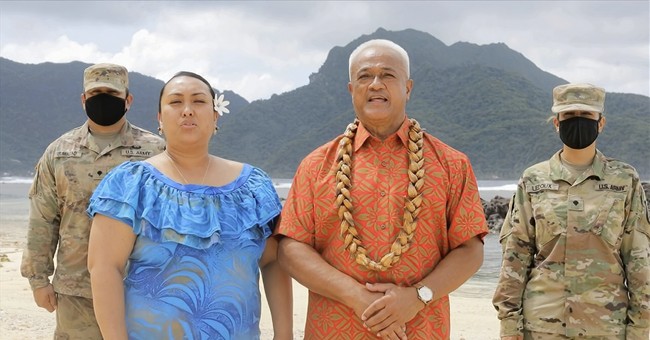 Two U.S. Army soldiers appeared to have violated the Department of Defense's rules on attending political events while in uniform during the second day of the Democratic National Convention. The possible infraction occurred while the American Samoa delegation presented their delegate votes to nominee Joe Biden.

"Joe Biden honors our service and we trust him to support our community. As vice president, he helped expand rural infrastructure to communities like ours. As president, he will continue to strengthen rural America from new England to the pacific," Petti Matlia said.

"On behalf of the governor and the American Samoa Democratic Party, we proudly cast 11 votes for our next president of the United States of America, Joe Biden," Aliitama Sotoa concluded.

Two soldiers, wearing their uniforms, stood in the background, but did not speak.

"All members of the Armed Forces, including active-duty members, members of the reserve component not on active duty, and retired members, are prohibited from wearing military uniforms at political campaign or election events," the Pentagon press office told Townhall, referring further questions to the Army.

In a statement to Townhall on Wednesday, the military branch said they are investigating the manner:

"The Army is investigating two Soldiers from the 9th Mission Support Command who appeared in uniform during the Democratic National Convention on Aug.18. Wearing a uniform to a partisan political event like this is prohibited.  The Army follows the Department of Defense's longstanding and well-defined policy regarding political campaigns and elections to avoid the perception of DoD sponsorship, approval or endorsement of any political candidate, campaign or cause. Examples of prohibited political activities include campaigning for a candidate, soliciting contributions, marching in a partisan parade and wearing the uniform to a partisan event."

Democratic Party spokeswoman Xochitl Hinojosa said the soldiers being included in the video was "an oversight."