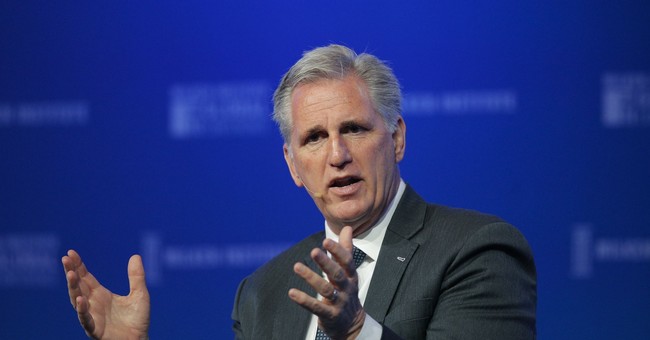 House Minority Leader Kevin McCarthy (R-CA) has been highlighting in recent days the new plan being pushed by Democratic leadership in the House on changing the rules for voting so that members do not need to be physically present during the Wuhan coronavirus pandemic.

The proxy voting proposal, being voted for on Friday, would allow members of Congress to cast votes for those who aren't in the House chamber to vote in person. The move is being criticized by House Republicans as a way for Speaker of the House Nancy Pelosi (D-CA) to consolidate her power.

In a statement released on Wednesday, McCarthy and Reps. Tom Cole (R-OK) and Rodney Davis (R-IL) called the proxy voting proposal the "biggest power grab in the history of Congress."

"As we have said from the start, any change to centuries-old rules of the House should only be done in a bipartisan way that achieves consensus. This proposal fails that critical test and would forever alter our democratic institution for the worse," the statement read. "It creates a dangerous new definition of 'voting by proxy' that runs counter to past House committee precedent, current Senate committee practice, and the Constitution."

The trio also voiced concern that the proxy voting proposal disregards the rights of the minority party "at all levels."

McCarthy quipped on Twitter he was a "hell no" on the proposal.

Nancy Pelosi is about to launch the most significant power grab in the history of Congress. "Voting by proxy" runs counter to 200-years of House rules and the Constitution itself.#DemocracyDiesInDarkness

Since the House is in Democratic control, senior GOP aides told Townhall the vote change is expected to pass along party lines and Republicans are planning on working around it.

Their main concern is how the proposal has changed to where the proxy voting can be used on other legislative items that are not related to COVID-19.

"Once this is adopted, our options are somewhat limited in how we can proceed," one aide said, adding they can expect more Republicans showing up in person to vote and more Democrats using the proxy vote option.

House Republican leadership unveiled a plan for Congress to continue working in Washington, D.C., especially given how the Senate is back in session.