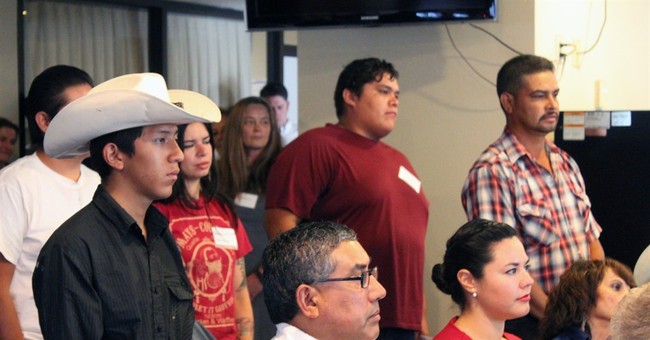 There has been a recent trend among progressive liberals who insist on using "Latinx" to describe the Latino community at large and it's a symptom of larger problem. The problem is they are looking down at a group for their backward way of life while using them to bludgeon conservatives.

Searching on Twitter, you'll find an endless amount of verified users using "Latinx," the gender neutral term for Latino, since the Spanish language is gendered and skewed towards the masculine side. A group of all females would be referred to as "Latinas," but all it takes is one male to be part of the group and it would then be referred to as "Latinos."

This race is far from over. Bernie has real strength with latinx voters, money, and an energetic base. But if the takeaway from last night is that it's Warren's fault he got crushed with black voters because a Jacobin article said so, they are doomed to repeat the same mistakes.

We are fighting for an America where women are paid more than 80 cents for every dollar a man earns.

Where black women are paid more than 62 cents.

Where Latinx women are paid more than 54 cents. #WomensHistoryMonth pic.twitter.com/11HXBAwiuy

We're helping to bring about a New South that is bold, diverse, and inclusive. These folks from the Latinx community in Charleston share that same goal. Great conversation and happy to have their support! pic.twitter.com/Cm30gsaNYc

According to progressives, this is a problem. Now there are Latinos who have adopted the new label and it would certainly be different if there was a large reckoning within Spanish-speaking countries on changing the very foundation of their language, but that's not the case since Twitter is not entirely representative of the real world.

Even progressive pollsters found a whopping 98% would label themselves as something other than "Latinx." Because that's the thing, there's already a gender neutral term for us: Hispanic. There's also just describing yourself as your country of origin or where you draw your heritage from. Progressives are trying to solve a problem that does not exist to score woke points from other races.

If using "Latinx" would be beneficial to your political aspirations, it has yet to be realized. Sen. Elizabeth Warren (D-MA) officially dropped out on Thursday after not winning a single state. While the reasons why she performed poorly are many, clearly going all in on "Latinx" did not help.

When I become president, Latinx families will have a champion in the White House. #LatinxHeritageMonth pic.twitter.com/yIcoBHGjMV

Yes, these are hard times. Yes, people are afraid. And the danger is real. Our very democracy hangs in the balance. But Latinx and Chicano history teaches us the power of fighting back. pic.twitter.com/wrIKGIPWI8

Rep. Pramila Jayapal (D-WA) even boasted about how strong Sen. Bernie Sanders' (D-VT) support was among the Latino community, and he does so without using "Latinx."

I hear Biden talking about how Latinx folks are huge in America. How about we listen to them then? Here’s the summary of how Latinos feel about the presidential candidates. If the Dem party cares about this, then STOP and listen. They are overwhelmingly for @BernieSanders. pic.twitter.com/YrNJAmIVVU

It's smart for Sanders to not use the term as Warren did because, as demonstrated above, the vast majority of Hispanics do not use the term and it looks like a white person subtly telling them that the language they use at home or at work is inherently sexist and to vote for them to help solve this problem that was unknown to them. Quite the winning message for a growing electorate.

So while a very small, yet vocal, minority use "Latinx,"it's not an actual thing within the Latino community and it's condescending to pretend otherwise.

WATCH: Former President Trump Addresses CPAC
Townhall
Internal emails from the Hollywood Foreign Press Assn. are WAY WORSE than anything Gina Carano ever said. Why aren't the Golden Globes canceled?
Twitchy
Joe Biden Speaks in Houston, What Follows Should Make You Question Everything
Redstate
Biden's Latest Verbal Slip Might Be His Most Disturbing Yet
PJ Media